This post is based on an email that was sent and in no way reflects the views and opinions of ''Met'' or Jamaicanmateyangroupie.com. To send in a story send your email to likeacopcar.78@gmail.com
October 16, 2016 11:34 am

DEPORTEE SAYS SHE WAS FLEECED 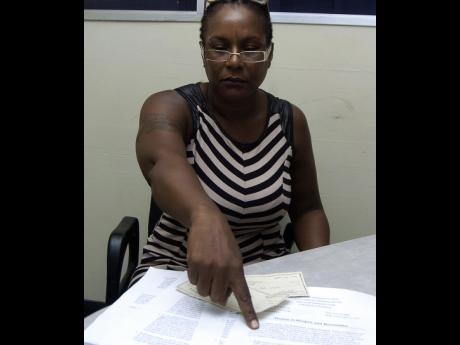 Head of the Deportee Assistance Unit (DAU), Dr Jephthah Ford, last week distanced himself from allegations of fraud brought against him and his executive director by a woman, who claimed she was fleeced some $80,000 for assistance to return to the United States (US).

Ford and Shechem Lafayette, executive director of the DAU, were brought to court by Andrea Taylor, who was deported from the US for allegedly trafficking marijuana from Los Angeles to New York in 1996.

Taylor said she felt she was unfairly deported and contacted the DAU earlier this year for help towards an appeal to the US government. Lafayette, she said, charged her two payments of $40,000 each for his assistance, but has repeatedly failed to provide her with any meaningful information.

In February, both Ford and Lafayette were gushing over a ruling which they said they secured from the United States Board of Immigration Appeals, which suggested that thousands of Jamaicans were being deported unfairly from that country.

Now Ford is expressing regret over getting involved with Lafayette in the first place, who himself had also been deported from the US several years ago. According to them, neither Ford nor Taylor has seen him in weeks.

“I am innocent,” declared Ford, after turning up to answer allegations of contract breaching at the Kingston Parish Court on Sutton Street last Thursday. “To my great distress, I took in a boy who was a deportee, who knows the American legal system, train himself in it and is an expert.

“He goes around and he takes people’s money, like the woman (Taylor) in question, takes her money in a car park. Now, the whole system is right here, and once he takes the money he cannot do the job for her. So I don’t know anything about it.”

Taylor said the first payment of $40,000 was made on April 1 this year, and that another payment was made 12 days after that. Ford said, however, that he only heard about the transaction a few weeks ago.

“Four months afterwards she turned up at my office and told me that she gave him money, and I asked ‘how you give him money in a car park and outside in the front of the yard? Any business can operate that way’?” he asked.

“The boy took her money and steal it,” he continued, noting that his office has been fending off at least four other complaints that have come against them from persons reporting to have paid money to Lafayette.

“We found out he has a little office operating in Linstead [St Catherine] and he has been scamming people. That’s why you don’t hear anything about DAU from me anymore, because anyhow you look at it, it is going to be bad for us,” he said, explaining that he has known Lafayette for many years and saw no indications of the actions he has been accused of.

Ford said that, like Taylor, he has reported the incident to the police and that the cops have been combing sections of St Catherine in search for Lafayette.

“I have not done anything wrong,” Ford reiterated.

Ford said that he went to court last Thursday with the aim of defending himself, but that when he heard the seriousness of the allegations he asked to have the case rescheduled to have his attorney present.

On Thursday, a worried Taylor sweated profusely as she outlined her case. She said the $80,000 was initially set aside for her daughter’s tertiary tuition.

Instead, Taylor said, she opted to pay Lafayette the money to file the motion aimed at having her return to the US.

“I got the application letter for my daughter’s college and I said that I will not bother with it because it would be better if I get a chance to go back to the States, take her up, and she can get to go to college over there. I never know that he was going to take my money,” she fumed.