This post is based on an email that was sent and in no way reflects the views and opinions of ''Met'' or Jamaicanmateyangroupie.com. To send in a story send your email to likeacopcar.78@gmail.com
June 9, 2013 9:15 am 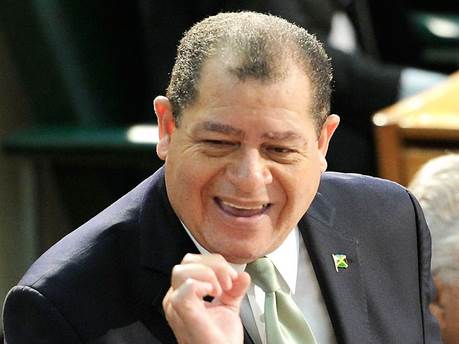 Finance Minister Dr Peter Phillips remains upbeat and confident despite the jitters in the economy after the Jamaican dollar reached a record low against the United States currency last Friday.

The Jamaican dollar cracked the psychological 100 mark, closing trading at a weighted average rate of $100.08 to US$1.

But speaking with The Sunday Gleaner from Europe, where he was on official business, Phillips said the economic programme being pursued by the Government is not under threat and remains intact despite the slide in the value of the dollar.

“The programme is not faltering. Indeed, the BOJ (Bank of Jamaica) has been steadily rebuilding reserves as the main priority.

“This is likely to have had some effect on the rates, but this will be beneficial to the longer-term stability and growth of the economy,” said Phillips.

The finance minister was accompanied to Europe by the senior members of his financial team, BOJ Governor Brian Wynter; Financial Secretary Devon Rowe; senior director of the Debt Management Unit Pamela McLaren; and technical adviser to the minister Helen McIntosh.

He said the trip was a good one as he headed for home.

“The view that Jamaica is beginning to take charge of its economic recovery is beginning to be heard in the European markets. But there is still a way to go,” said Phillips.

The finance minister’s claim that there is no reason to panic seems to have support from former financial secretary, Dr Wesley Hughes.

He told our news team that the current slip in the value of the dollar is indicating a greater demand for the US currency at this time.

“I don’t think we should be scared. People demand US dollars for all kinds of reasons. For imports, travel, school fees, and many others. So the price will adjust and that is essentially … what is at work here.”

Dr Hughes said he did not view the current situation as being adverse to the country’s programme with the International Monetary Fund (IMF) as a combination of “import less, and export more” is part of the solution.

However, university lecturer Shelia Balfour does not share this confidence.

While not declaring that it is time to panic, Balfour issued a dire warning.

“The dollar is vulnerable and it will get worse if we don’t produce,” said Balfour, who is also a business strategist and researcher.

“So if we continue doing what we are doing, the dollar will decline further because it is always vulnerable.”

Balfour said the problem in Jamaica is a balance-of-payment issue, as the country continues to import more than it exports.

“We have to produce more, plus cut the oil bill and the food bill. We need to deal with import substitution; we need to develop the small business sector, and not develop it with hustlers, we need a sector with sustainable businesses that can earn foreign exchange.”

That is a view shared by Opposition Spokesman on Finance Audley Shaw.

“The situation is worrying and I am very concerned. It is worrying that after an initial period of modest revaluation, the dollar has been steadily declining again,” said Shaw.

“It has revalued at a time when there is no peak demand for foreign exchange, especially as we should have received inflows from the IMF.

“If you are having this kind of manifestation, then that is cause for concern and indicating problem,” Shaw told The Sunday Gleaner.

He noted that the dollar has lost value despite modest inflows into the Net International Reserves and the injection of funds into the Consolidated Fund.