This post is based on an email that was sent and in no way reflects the views and opinions of ''Met'' or Jamaicanmateyangroupie.com. To send in a story send your email to likeacopcar.78@gmail.com
February 5, 2015 7:37 am

CORRECTION; IT WAS A SIXTEEN YO BOY THAT WAS SHOT YESTERDAY 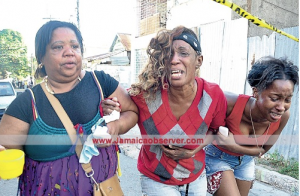 A sixteen-year-old student of the Tivoli Gardens High School was gunned down at his gate yesterday, and a senior citizen injured during a shooting incident on Kingston Lane in Fletcher’s Land.

The youngster, Jamieke Tyrese Smith, otherwise known as ‘Guess’, was reportedly fatally shot while doing repairs to the gate of his home.

According to the police, the shooting death is a suspected reprisal for an incident which occurred on Tuesday night.

However, Superintendent Michael Scott of the Kingston Central Police Station said that he could not disclose any further information at this time.

The teen’s mother Shernett Bryan tearfully recalled her last moments with her son.

“Today he was supposed to get his report from Tivoli High School. He woke up and said, ‘mom I don’t feel to get up’.”

“I boil a pot of porridge because him love porridge. I said to him, ‘Son I didn’t get to tidy up ’cause my hours were on me so when you get up you can tidy up’.”

“I left his lunch money with him. When I was at work I get a call saying that him get shot,” Bryan told the Jamaica Observer.

“I know him because he was brought to my office one day and I had to speak to him regarding problems he was having with a teacher,” Durrant said.

Meanwhile, the death of the teen yesterday sent shockwaves throughout the community with Member of Parliament Desmond McKenzie issuing an appeal for the perpetrators to turn themselves in to the police.