This post is based on an email that was sent and in no way reflects the views and opinions of ''Met'' or Jamaicanmateyangroupie.com. To send in a story send your email to likeacopcar.78@gmail.com
December 18, 2016 9:03 am

Feeling a pinch in Christmas sales, vendors at Coronation Market, in an effort to allay consumers’ concerns about safety, are encouraging shoppers to return to the market.

“It is safe to come and shop at Coronation Market again,” was the statement Shernett Williams continuously repeated as the

“Mi nuh know if the people dem scared of downtown, but we would a really like fi see more shoppers come inna di market because, di tings dem reasonable an we have a whole heap a tings here dis year. Dis year we nuh have no drought nor nutten, so things in abundance.” 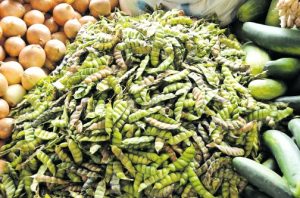 Williams, in making reference to the recent upsurge in violence in West Kingston and the killing of 49-year-old vendor Peter Nelson last month, noted a dip in the number of customers at the market in the usually busy Christmas season.

Nelson was shot dead in the market by two gunmen whom the police said have since been apprehended and charged.

Thursday is usually the start of the busy market weekend, and the day fresh produce are transported from rural Jamaica to vendors. However, when the Sunday Observer visited, vendors complained of a low and slow turnout in customers, which they expected would have been boosted in light of the Christmas season.

Her colleague, who identified herself as Tanya, sat idly at her stall filled with produce as she, too, complained of the elusive Christmas crowd.

“You normally a see whole heap a people. Normally you would a see the place crowded an’ so, but we nah see dat. Today a Thursday, an’ market a Thursday an’ Saturday, an di market nuh proper; it nuh look like Christmas, it jus look normal,” she said. “Mi jus a gwaan ping pong an’ see wah can gwaan.”

Coronation Market — the largest of its kind in the English-speaking Caribbean — is usually buzzing with activity during the Yuletide season as consumers travel from all across the island to purchase produce at reasonable rates and in bulk.

But this year vendors have been disappointed.

“Mi nuh see no Christmas, only hear seh it a come,” Karen, a vegetable vendor, said when asked about her Christmas sale.

Sharing the same sentiment, Maureen, another vendor, said that there was “pure food and no buyer”. She, too, noted that the usual Christmas crowd had not reached the market.

“I think dem (consumers) nuh have di money like one time. I think is di money crisis; a nuh really nothing wid violence, a jus’ di money crisis,” Maureen told the Sunday Observer.

“One time, Christmastime like now you couldn’t even walk inside here, but it change now.”

When the Sunday Observer spoke with shoppers, they stated that increased prices were a deterrent.

One shopper, who noted she was yet to purchase anything for her household, was shocked at some of the prices that were quoted to her.

“Market dear … all $900 a dozen fi plantain,” Camille said as she shook her head. “It’s a little dearer than it usually is, but just some things.

For Paulette West, the prices seem reasonable as she anticipated the increase in light of the Christmas period.

“It nuh bad,” West said of her Christmas shopping. “Di prices a little bit more than last week though.”

“The price of gungo and sorrel normally increase when it reach Christmas week, so maybe next week, but right now it not so bad, although I purchase my sorrel an’ my gungo from last week. Last week I paid $100 for the gungo an’ this week is $120.

But pepper vendor Delano Thompson told the Sunday Observer that vendors can’t help but charge such prices as it is how they make a profit.

“Di ting rough, man,” Thompson said when asked of his $300 per dozen peppers.

“So is a tin margin when yuh check it out,” he said of his profits.

“Di load dem dear, man. Di load dear,” she said as she sorted through her crocus bag of limes.

“Maybe like next week tings a go get better. Maybe, maybe is not a sure ting, but maybe,” she stressed.