This post is based on an email that was sent and in no way reflects the views and opinions of ''Met'' or Jamaicanmateyangroupie.com. To send in a story send your email to likeacopcar.78@gmail.com
January 1, 2016 8:24 am 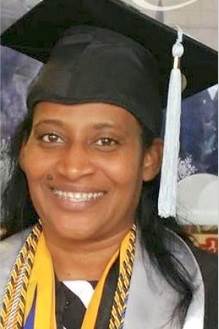 A Jamaican mother who migrated to Florida five years ago says she wants to use her newly acquired degree to help shape future leaders.

Cavel Cassandra Austin’s story was published on the University of Central Florida’s (UCF’s) website last month just before she and more than 5,000 students graduated during three ceremonies at UCF’s CFE Arena on December 18 and 19.

Austin, the UCF story said, left Kingston to help her ill mother and to provide better opportunities for her own children. Earning a college degree was the key to making it all happen.

Now, she holds a bachelor’s degree in English language-arts education.

“I have had a very rough life, but through it all, it has made me stronger and more determined to succeed,” the story quoted Austin. “UCF has afforded me the opportunity to shine and to tap into my true potential.”
According to the UCF story, Austin lived in one of the poorest neighbourhoods in Kingston. Despite the challenge, she went on to complete schooling and even volunteered to tutor Grade Six Achievement Test students at King’s Chapel Seventh-day Adventist Church. That’s when she decided she wanted to become a teacher.

When she moved to Orlando, however, none of her volunteer or school work transferred as college credit, so she had to start from scratch at Seminole State College, the UCF story said.

“Undeterred, she earned her associate’s degree and transferred to the university through DirectConnect to UCF. Once here, she was a model student seeking out leadership opportunities and earning multiple awards, including the Order of Pegasus Award this year. That’s the highest UCF academic honour a student can achieve,” the UCF story said.

Along the way, she found ways to give back to others, and her academic success at Seminole State earned her a spot in The Burnett Honors College at UCF.

“Her experience completing her Honors in the Major Programme thesis led her to launch a mentoring programme to help other students through the process,” the UCF reported.

Austin was a resident intern for a ninth-grade English class at a Seminole County high school during her junior and senior years and interned abroad at Tor Bridge High in Plymouth, England, in November. She worked with grade seven to 12 literature students and could relate to the curriculum in the English classroom since she grew up with a British educational system. The opportunity, the UCF story said, provided her with international teaching experience along with educating 10th-grade students about Jamaica during a cultural presentation.

“When she wasn’t studying, caring for her mother and raising her two children, she volunteered at the Coalition for the Homeless in Central Florida and tutored high school students,” the UCF story said.

“Ultimately, I want to earn my PhD so that I can contribute more profoundly to the education system that will empower students to become future leaders,” Austin is reported as saying of her long-term aspirations.

In the meantime, she wants to teach low-income students in a local Title I school.

“I want to change and nurture students and make them realise that education is important and stop the poverty cycle,” she said.