This post is based on an email that was sent and in no way reflects the views and opinions of ''Met'' or Jamaicanmateyangroupie.com. To send in a story send your email to likeacopcar.78@gmail.com
October 25, 2015 9:11 am

CHILDREN HAVE NOT BEEN TO SCHOOL IN TWO YEARS 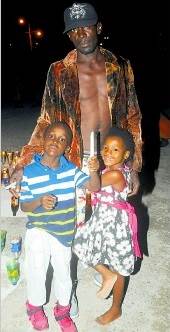 ANTONIO Harris is a broken man and he’s saddened that since the death of his children’s mother, Sophia Johnson in 2014, he has been unable to get them into school.

When the Jamaica Observer spoke to Harris last week at the vigil held at the Pechon Street Car Park in Kingston to mark the 150th anniversary of the Morant Bay Rebellion, he said that as a single father he tries his best to earn his bread honestly and support his children Jaheen and Aaliyah Harris, aged seven and five.

But, when Johnson died he could not locate the children’s birth certificate or immunisation records, which have caused him a great drawback. Harris further explained that they didn’t live together and from what he’s seen the children have been out of the education system for almost two years.

“I never lived with her when she was alive and people would always tell me that she would leave them and go away all the while, go about her business. I don’t even know the school they were going to,” he said, lamenting how his child’s mother cared for their children.

However, when he chose to visit them last year, he received bad news.

“Someone told me she was sick and I went to the hospital and saw her with tubes through her nose. She couldn’t walk or talk, she was just there,” Harris said. “When I went back to visit her on December 11, 2014, I heard that she died.”

It was at this point that he made efforts to get them into school, but this proved futile — the necessary documents could not be found. To make matters worse, Harris said that in an attempt to get the birth certificates, checks at the Victoria Jubilee Hospital revealed that there were no records of the children being born there.

“Jubilee no have no evidence seh is down there dem born. It look like she never register them any at all,” he said.

Opting to try another route, Harris said he spoke to a school teacher on August 16, 2015 who offered to help. But since that day, he is yet to see or hear from her.

“She explained to me that RGD [Registrar General’s Department] would assist with a late entry and said she could help me. I give her the forms I had from August and me no see her back,” he said.

Added to that, Harris said that he was told to get some of Johnson’s relatives to verify that the children are indeed hers, but admitted that he only met her sister when she died.

“I don’t know any of her family members. I saw her sister once when she died and even she offered to help, but I have been unable to locate her,” he said.

In the interim, Harris said that the issue has caused him nothing but stress and he has contemplated placing them in State care in order for them to get an education.

“They are not going to school and that’s the problem. I work and look after them it’s just getting them into school is the problem, because I don’t have the birth paper or immunisation card. It a stress me out, especially when I see everyone’s children going to school and them nah go. I wanted to send them to a home but it pain me heart. I just need assistance in getting those documents,” he said.

Moreover, he explained that whenever he has to work, which consists of either masonry, carpentry or gardening, he has to bring them along with him.

“More time I have to bring them to do yard work with me. Sometimes Jaheen will get a shovel and paste mortar on the wall and rub it down. Him will get him hammer and learn him stuff, but him need fi go school,” he stressed, adding that his daughter is almost six and does not have an early childhood education because of the issue.

Harris maintained that getting assistance to have his children enrolled in school is his main concern, as for him, education is his main priority and time is running out.