This post is based on an email that was sent and in no way reflects the views and opinions of ''Met'' or Jamaicanmateyangroupie.com. To send in a story send your email to likeacopcar.78@gmail.com
June 9, 2013 9:06 am 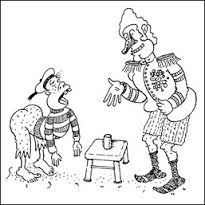 Minister with responsibility for information Sandrea Falconer, made the disclosure last week just as Opposition Member of Parliament Daryl Vaz repeated his call for the Government to honour its pre-election commitment.

“I know it is a matter that will come up in Parliament in short order where members of parliament will have discussions with their constituency and for them to come back to Parliament,” Falconer said last Thursday.

Falconer, who was speaking at the weekly Jamaica House press briefing, declined to say whether Simpson Miller will be piloting the issue in the House of Representatives, but disclosed that it will definitely be on the parliamentary agenda.

“It will certainly be within this parliamentary year,” said Falconer.

During a leadership debate on the eve of the December 2011 general election, then Opposition Leader Simpson Miller said her administration was committed to the protection of human rights.

Simpson Miller declared that it was time for a review of the buggery law, saying she believed the issue should be put to a conscience vote in the Parliament.

Placed on the back burner

Nearly a year after her administration took power, Falconer said the issue had come up at Cabinet, but had been placed on the back burner.

“Not that the buggery law is not of concern to a segment of the population, but the issues like crime and the economy, we decided that we are going to give those our priority in terms of the legislation that we pass this year,” the minister said last November.

But last week Vaz, a former information minister, argued that the issue has lingered for too long.

“Where as I understand and appreciate the economic challenges which the country has faced along with the spiralling crime situation, the time has now come and the issue of the buggery law is impatient of debate,” said Vaz.

He argued that given the current make up of the Parliament, there will be mixed views which will augur well for a vibrant and robust debate.

Gay-rights advocates, and members of civil society, in their quest to have the buggery law repealed, have been met with strong pushback as the Church and anti-homosexual groups have argued that not only is the act immoral but is also unhealthy and should not be encouraged.