This post is based on an email that was sent and in no way reflects the views and opinions of ''Met'' or Jamaicanmateyangroupie.com. To send in a story send your email to likeacopcar.78@gmail.com
October 25, 2015 9:16 am 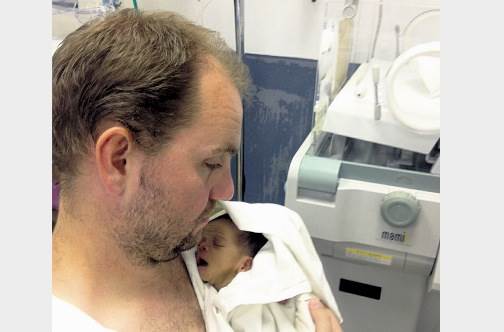 IN February of this year when British barrister Sam Nicholls and his wife were rushed from another Caribbean island to Jamaica for the emergency delivery of their baby, they both knew the situation would be no walk in the park, but they had no idea of the level of trauma that was about to unfold.

Sam Nicholls, whose wife is also British but of Jamaican parentage, explained that while the hospitals in the Caribbean island where they now reside are well-equipped, Jamaica was chosen for the emergency delivery because of the calibre of the doctors here.

His wife had been diagnosed with pre-eclamsia, the most common complication in pregnancy, and if she and the baby were to survive, an emergency caesarean section was imperative.

“So we were flown by air ambulance from our island to the UHWI (University Hospital of the West Indies) because there are more doctors there and a higher level of neonatal care,” he told the Jamaica Observer.

Nicholls said his son was born two months premature and weighed just 3.5 pounds. Baby Nicholls was immediately taken down to the Neonatal Intensive Care Unit (NICU) to be treated for a number of health issues that ‘preemies’ are usually at risk for, such as respiratory distress syndrome and necrotizing entercolitis (NEC) — a serious intestinal illness.

Having NEC meant the newborn had to be fed using Total Parental Nutrition (TPN) which bypasses the digestive system and goes directly to the bloodstream for the nutrients to be absorbed. But Nicholls said he was shocked to discover that the intravenus nutrition was not available at the hospital.

“Astonishingly, the consultant in charge at the time thought it was available at the hospital and her junior doctors had to say ‘no it’s not’, so the consultant had no idea what her own pharmacy had, and it was left to the last minute for me to go and find it. I had to go to a private place to get that,” said Nicholls, who made it clear throughout the interview that he had no issues with the level of expertise at the hospital, but wanted to outline that the systems and protocols that the health ministry are insisting are in place are not what occurs on a daily basis inside the NICU.

According to the barrister, that was not the only time he went on the hunt for a life-saving implement or drug. First it was for magnesium sulphate for his wife on the day when his baby was to be delivered. The hospital did not have the drug, which

The father said that this was the first indication of “how things would go”.

Nicholls said he has decided to come forward with his story following the health ministry’s disclosure last week that 18 babies died at the UHWI and the Cornwall Regional Hospital since June from bacterial infections. He said he is appalled that the health ministry could have just discovered the outbreak, and is even more concerned that the authorities are “passing the buck”.

The father pointed to the assurance given by the health ministry that there are adequate supplies of the antibiotics needed to treat the infections, stating that had not been his experience when doctors thought his son had an infection when his blood count dropped.

“Prior to that he had been given increasing doses of antibiotics, so they said we are now at the stage where we need to go to the highest antibiotics that we can possibly use. They then said to me the problem is it’s not available at the hospital pharmacy, and it’s Saturday night and you won’t get it until Monday morning. The impression I got is that the hospital pharmacy just didn’t stock it because it was very expensive.

“They said to me you’re going to have to go to a private pharmacy to get it, and they probably won’t be open until Monday morning, so if my son had that infection by Monday morning he would be dead. Maybe they are available now, [but] they weren’t when I was there,” Nicholls said, adding that fortunately the situation was resolved by other means.

Disgusting, is how Nicholls described conditions in the parents’ room which is just a few feet outside the NICU.

“There were cockroaches, litter wasn’t cleaned, no bins were provided, my wife tells me that the sanitary bin in the toilet was never emptied, and there was no hand soap provided at all. We actually put bars of soap in there from the hotel where we were staying. There was no toilet paper,” he said.

He said that he saw mothers expressing breast milk for their sick newborns who had impaired immune systems, in that unclean environment.

“You would have to sit on a sofa that was filthy, that looked like it had been there from day one … a sofa that someone previously sat on, who was not able to wash their hands in the facility provided, then the mothers are coming to express milk after touching something that was potentially infected with a nasty bacteria,” he said.

Nicholls explained that based on the setup, people aren’t able to wash their hands immediately before going into the NICU, and therefore would enter after touching the door (when the buzzing in system wasn’t working).

The hand-washing stations are positioned inside the cubicles where the babies are kept, so that parents have to pass the cots on their way to wash their hands. Nicholls said he would observe anxious parents sometimes going directly to their babies, forgetting to wash their hands. “There was provision for hand gel before you get to the cubicles, but quite often they were empty,” he remarked.

Nicholls said that the infection control protocols which hospital officials outlined last week are not what he observed during his three months of long hours with his son in the NICU.

“I saw student nurses, going between babies, not washing their hands. I had to challenge student nurses on a number of occasions – ‘have you washed your hands?’ – and quite often I would get the answer ‘no, let me do that now’,” he said.

He said that on one occasion a thermometer was taken out of his son’s cot, used on another baby and then brought back to his son’s cot. “I had to sterilise it myself… that’s how infection spreads. I challenged one of the nurses myself, and he said, ‘Oh, yes, you have to watch those student nurses like a hawk,” Nicholls recalled.

He said that he saw none of the medical personnel wearing protective masks or gowns of any kind. “The nurses were in scrubs that they were wearing before they entered the ward. There was no changing of clothes before coming into the unit at all,” he added.

Nicholls emphasised that: “I make no criticism of the nurses at all. They were fantastic in terms of their skills. No issues with the nurses, I’m speaking of the conditions that they are forced to work in.”

Nicholls said he could not have made any of this up even if he tried. “I was there for three months virtually every day, from nine in the morning maybe taking an hour or two for lunch until two at night sometimes,” he said

He recalled seeing the janitorial staff cleaning multiple surfaces inside

the NICU, “with the same dirty rag.”

He further said that: “They would start (cleaning) from one end of the NICU and they would use the same water throughout the ward… by the time they got to the end closest to the door the water was black. They wouldn’t change it. It was just unbelievable.”

Nicholls said that he witnessed a “shocking” incident one Sunday.

“There as a small toddler who came into the hospital with parents who had a baby on the ward (not the NICU). That toddler was in the family room and vomited on the floor and then the parents took him on to the ward, having just vomited. I had to tell the nurse…the mop was then used to clean the vomit, which was used to clean the rest of the ward. No new mop came on the ward,” he said.

Nicholls said that when he took his son back to the ward for a check-up in July he noticed that there were only three or four babies there. And when he asked, out of curiosity, one of the doctors told him that it was not a particularly busy time and that there had been a significant number of infections.

“I then found out from another family who had been on the ward where we were, that there had been a number of deaths in July.

Nicholls made it clear that he was not speaking up out of any malice or because he had any political bias. “I have no political interest in Jamaica at all. I don’t live there, I don’t have the right to vote, don’t care what political party it is. So this is not a political issue for me. Babies have died unnecessarily.”

He explained that he had opted not to write to the hospital management because by the end of his son’s stay at the facility, he was just very relieved.

“By the end of my stay there I was so depressed I wanted to just try to forget about it. I had had enough of three months on that ward, constantly going in day after day wondering if I’m going to find my son dead or alive. That was as much as I could take at the time. I was going to, but then I just thought, ‘No I don’t want to do this’, and I didn’t know whether my son was going to have to go back at some point,” he told the Sunday Observer.