This post is based on an email that was sent and in no way reflects the views and opinions of ''Met'' or Jamaicanmateyangroupie.com. To send in a story send your email to likeacopcar.78@gmail.com
February 10, 2015 9:49 am 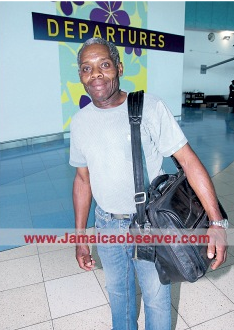 LLOYD Bogle admitted that he was nervous as he waited in line to check in to his flight at Norman Manley International Airport in Kingston last Friday.

His heart raced as he remembered what happened the last time he attempted to leave the island.

“I had to really try hard to steady myself. I was nervous,” Bogle told the Jamaica Observer.

The 64-year-old man, who was dressed in a light blue T-shirt and blue jeans, said that he prayed as he walked up to the customer service agent.

After a few minutes spent at the counter, Bogle returned with a broad but weary smile.

His nightmare, his months filled with sleepless nights and periods worrying as to whether or not he would ever see his family again, had ended.

“They said everything is intact and I am all set to go,” said the five feet, seven inches tall man who appeared to have aged over the last five months that he was left stranded in Jamaica.

As he gave the update, he paused for a few minutes, took a deep breath and slowly exhaled as he realised that his anxious wait to return to his home in England had officially ended.

Before he left, he again expressed thanks to the thousands of Jamaicans and other persons who supported him during his ordeal.

“I will never forget Jamaica, and I just want to say thanks to all those who supported me and stood behind me in my time of need,” said Bogle.

He said that the level of support from Jamaicans, who took him in as a total stranger and stood by him in his trying times, showed that the positive aspects of the country far outweighed the negative.

“There is so much that is right and positive about Jamaica, and the past few months staying in the island have showed me all of that,” Bogle told the Observer, just hours before he boarded the flight to make the trip back home.

“I was really nervous, my heart was pounding, but I was confident that there would be no other incidents,” said Bogle, referring to his ordeal last October when he attempted to leave the island and was turned back because his paperwork was not in order.

Bogle, who left the island over 50 years ago at the age of seven, retired last year and decided to visit Jamaica for two weeks. However, in all his years in England he never changed his immigration status. The upshot was that when he visited Jamaica he came without a British visa, and as such was not allowed to fly back home.

“I just never knew that I had to have a visa to travel back,” said Bogle.

He assumed that having lived in the United Kingdom for that period of time since 1957, having attended school, working, getting married, having children… he had automatically become a British citizen.

His case was highlighted by the Observer and drew widespread local and international attention as it was revealed that several people living in the UK and other areas were ignorant of the laws.

The British High Commission in Jamaica, along with other officials locally and aboard, announced that they would be looking into the matter, and after few days a visa was granted to Bogle.

Bogle said that since the incident he plans to inform others in and around his hometown of his experience to prevent them from repeating his mistakes.

Jamaica’s High Commissioner to the UK Aloun N’dombet-Assamba has since spoken of Bogle’s case and has gone on record to announce plans to keep more public meetings in the UK to inform unaware Jamaicans living there for several years to apply for citizenship.