This post is based on an email that was sent and in no way reflects the views and opinions of ''Met'' or Jamaicanmateyangroupie.com. To send in a story send your email to likeacopcar.78@gmail.com
July 25, 2016 4:24 pm

The family of the late Bishop Steve Ricketts is living in fear. Ricketts’ brother, Bishop Shawn Lawrence, head of the Free Gospel Church of God, told The Star that ever since the rumours of Ricketts alleged lifestyle was published in the media, his family has become very concerned.
“People must remember he has his family members left here. I am terribly upset about his house picture which has been posted in The Gleaner. I’m scared now to go there. Because maybe I go there and people come and hurt me, burn it up, shoot me, and say I’m one of them,” Bishop Lawrence said. “I don’t know him to be of that lifestyle. I know him as my brother and a God-fearing church leader. So I’m really very upset. We must remember that he has his children left behind, he has his wife left behind, and people have to live in the house.”
On Friday, Devon Fray, who last week denied being involved with the late bishop, was attacked by several persons in Linstead, who claimed they didn’t like his lifestyle. He too is now in fear for his life and Bishop Lawrence is adamant that all that is being said about his brother’s lifestyle are just stories. 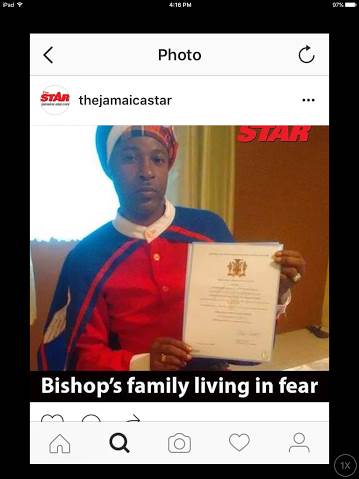 Lawrence describes the whole ordeal as heart-rending and painful. “I’m ashamed to walk in Linstead. I’m not ashamed of my brother, but I’m ashamed of what the media bringing and everyday since this incident there’s a different story in the media. When I spoke to my sister-in-law (Mrs Ricketts) she was just crying because it is so heart-rending. It is really disturbing, all these stories,” said Lawrence who has been a bishop for 23 years. “I don’t know him to be what the media have been publishing him as. I don’t know him to be that vulnerable, evil person. I know him to be a caring, God-fearing person. Steve was one of a kind.”
Ricketts, who has seven children remaining, is described as very loving and a people person.
“I know majority of what they are saying are lies. When Steve was alive from the entrance of Commodore Cemetery to the bottom of Grove Road, Steve was for everybody and everybody was for Steve. So I don’t see why now that he has died all types of rumours and bringing down of the family, bringing down of the church,” said Bishop Lawrence.
He is appealing for the media to be more responsible when making various reports. “Remember, he left family here, people lives still have to go on. We are concentrating on burying three family members and it’s not easy to be dealing with the death of three family members and what is circulating not only in Jamaica but around the world.”