This post is based on an email that was sent and in no way reflects the views and opinions of ''Met'' or Jamaicanmateyangroupie.com. To send in a story send your email to likeacopcar.78@gmail.com
June 12, 2013 1:12 pm

AS PARENTS WHAT WOULD YOU DO? 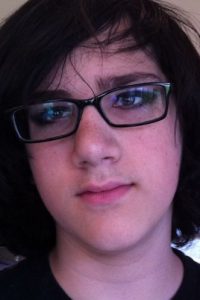 Chris Martin wears black eyeliner and eyeshadow, just as he did on his last day of eighth grade.

ST. PETERSBURG — After years of struggling to feel comfortable in his own skin, Chris Martin — who chooses not to label his sexual orientation — decided to wear black eyeliner, eyeshadow and lipstick on the 14-year-old’s last day in the eighth grade.

But as soon as he got to Meadowlawn Middle School on Wednesday, administrators told Martin he was violating the dress code. They wanted him to change his shirt and wipe off the makeup.

The two women who raised Martin said they understand why the shirt’s image — an anarchy symbol and sheath — was against the dress code. But the parents said the modest makeup was no different than what girls wear everyday.

The principal’s negative reaction to a boy wearing makeup prompted them to start a petition urging the Pinellas County School District to improve tolerance in the classroom. “When I asked what was wrong with his makeup,” said his mother, Jamie Himes, “the face the principal gave me made my blood boil.”

“There is more to the story,” Parra wrote in an email. “But that would mean sharing confidential student information, which I am not at liberty to discuss.”

After receiving an upset phone call from their son on Wednesday, Himes and her partner Katelynn Martin said they met Effiom in the front office. They ceded that the shirt was inappropriate, but they asked why was makeup against the dress code? They said makeup is not even mentioned in the school handbook.

Martin said that the principal told them that it was “distracting” and “completely ridiculous and unnecessary for boys to wear make up” in front of other parents, staff and students.

“It was kind of shocking,” said Katelynn Martin. “I can’t believe in this day and age that someone would think this was that big of an issue.”

The family then contacted the district superintendent’s office. Hours later, the district said it backed the principal’s decision.

The parents said this is not the first time their son’s sexual identity has caused him turmoil at the school. Other kids have beaten him up, teased him and destroyed his belongings, they said, while the school’s response has always been lukewarm.

Wednesday was the tipping point. The family launched a petition on moveon.org asking the district to improve tolerance training for all teachers and administrators and encourage schools to teach LGBT history and host Gay-Straight Alliance clubs. By Friday, it had more than 225 signatures.

“Schools need to be a safe place, and students need to know they won’t encounter intolerance there,” Himes said. “It’s not about our son anymore, it’s about intolerance.”

Chris Martin, who spoke through his parents but declined to talk directly to a reporter, said he supports the petition.

Lauren Carroll can be reached at (727) 893-8913, lcarroll@tampabay.com or @LaurenFCarroll on Twitter.