This post is based on an email that was sent and in no way reflects the views and opinions of ''Met'' or Jamaicanmateyangroupie.com. To send in a story send your email to likeacopcar.78@gmail.com
June 19, 2016 1:56 pm 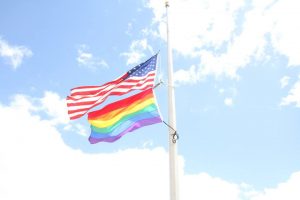 Dear Editor,
I commend our Attorney General Marlene Malahoo Forte for her boldness in standing on a principled and moral position that also reflects the views of the majority of our people whom she and her Administration represent.
I totally condemn the despicable act against citizens of the USA and also extend condolence to the families of those who lost their lives and suffered injuries in this latest occasion of a mass shooting in that country. Jamaicans, including myself, love and appreciate the United States as a nation and it is a country that has done a lot of good in the world.
I note, however, that on the occasions in recent history when mass shootings have left Americans dead and devastated, the US Embassy has seen it sufficient to fly the US flag at half-mast as an appropriate and widely understood international gesture of solidarity with those who have lost loved ones and suffered significant injury. The question arises as to what motivated the US Embassy on this particular occasion to fly another flag which is not one of the official emblems of that country?
Ask any diplomat and he or she will tell you that there is a language of flags. Flags have meaning as do the positions of them and the occasions upon which they are flown. They are a means of communicating allegiance, ownership and even intention. Your diplomat friend will also tell you that between allies, and even at times between enemies, that diplomacy requires respect and the art of understanding the customs and beliefs of those with whom one engages. The diplomat makes every effort not to offend.
It is no secret that in Jamaica the law forbids certain types of sexual behaviours, and beyond that Jamaicans largely view homosexual acts as immoral and ungodly, which according to the scriptures they are. In light of all of this, it seems that the action of the US Embassy to mount the rainbow flag, widely accepted as the banner of the Lesbian, Gay, Bi-sexual and Transgender (LGBT) community, can only be interpreted as a deliberate act of provocation intended to advance a political agenda — a deliberate slap in the face of the Jamaican community.
This is not the kind of act that one expects from one’s friends. It also is the kind of act that would naturally lead the conversation away from the horrible fact that a gunman killed 49 people and injured several others in a nightclub and into an area of clear disagreement between the two nations, both of whom remain sovereign states. Since the US has no ability to legislate in Jamaica, they can only hope to influence beliefs.
We need leaders who have a clear moral vision and who are prepared to stand up for principle. Indeed, one of our chief weaknesses over many years as a nation has been the lack of principled leadership. Too often our leaders have signed on to treaties and taken decisions for the sake of financial or other expediencies which were not in the best interests of our nation and which were often at variance with the people’s views. To take a stand for principle is not something to apologise for, and Malahoo Forte should not be called upon to do so.
Jamaica remains a sovereign nation with the right to determine our own values, laws and beliefs, even if our neighbours do not agree with us. To attempt to impose alien practices and values on another sovereign state is to take a decided step outside of the realm of diplomacy and into another arena altogether.
Al Miller
Pastor
Fellowship Tabernacle