This post is based on an email that was sent and in no way reflects the views and opinions of ''Met'' or Jamaicanmateyangroupie.com. To send in a story send your email to likeacopcar.78@gmail.com
October 14, 2016 9:43 am 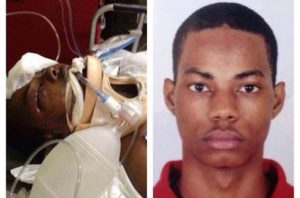 Damion Cargill, one of the three inmates charged with murder in connection with the beating death of Mario Deane, is to return to the St James Circuit Court on December 5 when the case against him is slated to continue.

Cargill, who is hearing and speech-impaired; and two other inmates who also have mental challenges, were arrested and charged in connection with the beating.

A number of police personnel, who were on duty at the time of the incident, were also charged with a range of offences.

The new court date for Cargill was given when the matter came up for mention in the St James Circuit Court.

The court was told that the defendant, who is being represented by attorney Franklyn Haliburton, had not been brought to court due to illness.

Deane suffered from the fatal injuries while he was in custody at the Barnett Street Police Station in Montego Bay on August 3, 2014. He died three days later in the Cornwall Regional Hospital without regaining consciousness.

In his previous court appearances, Cargill was deemed unfit to plea primarily on account of the results from a court-appointed examination by medical experts. Monday’s hearing was to address submissions in regards to his current mental state.

Cargill and his two co-defendants, Marvin Orr and Adrian Morgan, reportedly beat Deane while they were in custody at the Barnett Street Police Station in Montego Bay.

Deane was arrested earlier that day for the possession of a ganja spliff.

The beating death of Deane, who was reportedly denied bail under questionable circumstances, attracted significant local and international attention and is believed to have played a role in the subsequent decriminalisation of ganja, making it a ‘non-arrestable’ offence.