This post is based on an email that was sent and in no way reflects the views and opinions of ''Met'' or Jamaicanmateyangroupie.com. To send in a story send your email to likeacopcar.78@gmail.com
November 30, 2015 8:20 pm 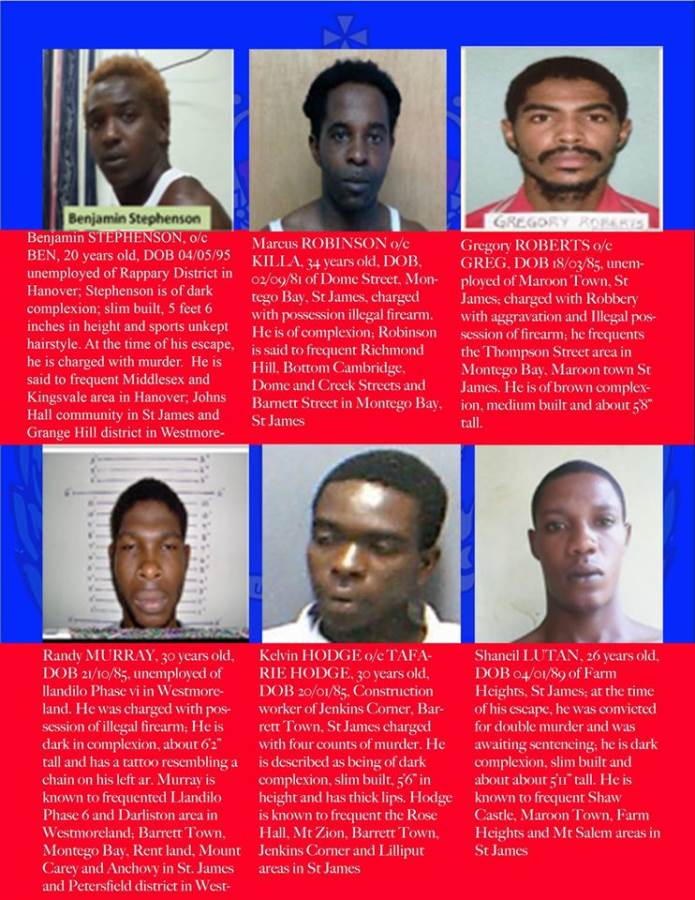 The Police have launched a manhunt for six prisoners who escaped from the Montego Bay Police lock-up in St. James on Monday, November 30.

They are:
•Kelvin Hodge, 30, labourer of Barnett Town, St. James who was charged for four counts of murder.

•Randy Murray, 30, labourer of Landillo, Phase 6, Savanna-la-Mar, Westmoreland who was charged for illegal possession of firearm.

•Benjamin Stephens, 21 of Dias, Lucea, St. James who was charged for murder.

•Shaniel Luton, 26, of Farm Heights, St. James who was convicted of murder and scheduled to be sentenced on Friday, December 4.

Reports are that about 6:00 a.m., during a routine cell check a hole was seen in the wall and the men found to be missing.Anyone with information that can lead to the recapture of these prisoners is asked to contact the Montego Bay Police at 953-6191, Police 119 emergency number or the nearest Police Station.

The Police are also reminding the public that it is a criminal offence to harbour a criminal.

PLEASE SHARE AND PROVIDE US WITH ANY INFORMATION YOU MAY HAVE.