This post is based on an email that was sent and in no way reflects the views and opinions of ''Met'' or Jamaicanmateyangroupie.com. To send in a story send your email to likeacopcar.78@gmail.com
January 27, 2016 8:00 am 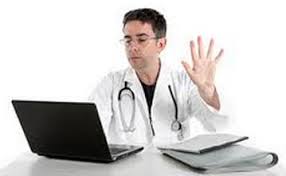 I write to you very perturbed n outraged about an incident at one of Jamaica’s leading private hospital last night 26th Jan,2016. A man rushed his wife to a high society hospital cuz she was feeling chest pains and he feared it was an heart attack.

They were recieved by a Jamaican woman doctor.They had been speaking on the cell with their own Doc n he advised of tests to take.When the results came back that’s when the major almshouse went down! DR Nastyassface a go say the results show everything normal so what was the use their Doc send dem a ER for??She was very abrasive n disdainful in her tone n delivery but the wife calmly explained their doc couldn’t have known the results BEFORE so hence the tests duh!!!
Few more words were spoken harshly from Dr.Nastyassface n the husband stepped in to tell her to tone down her unprofessional behaviour towards them.Met what happened next is histrie so a di fuss me a hear dis in any hospital Inna di world!

Dr.Nastyassface didn’t even beg excuse to answer her cell but went on it to ORDER 2 pieces of KFC chicken n DONT forget the COLESLAW!!!Dis crawses n wutliss cutliss of a person lacking human compassion stay pon her cell n a verify her order while di man wife may r may not be having a flipping Heart ATTACK!!! Better me done yah cuz u will read bout it cuz dem diss ppl all the while n don’t know who is who.How u fi diss a hubby n wifey dat di both a dem a lawyer n it just go so.It nah go so enuh Met n u n me know why me say suh!!!!!