This post is based on an email that was sent and in no way reflects the views and opinions of ''Met'' or Jamaicanmateyangroupie.com. To send in a story send your email to likeacopcar.78@gmail.com
July 30, 2016 10:34 am

WIFE TORN BETWEEN THE DEVIL AND THE DEEP BLUE SEA

HELP, I AM TORN BETWEEN TWO ULTIMATUMS

I am torn between the devil and the deep blue sea. I sincerely love my husband, but I am beginning to have a rethink about our marriage. This is because sometimes, the need for survival outweighs the love I have for him. More so, my sibling, especially, Idowu, my only male siblings, who is the sole benefactor, has insisted that I leave my husband or he would stop giving me money to feed him and our children.

I am my mother’s first child, though a twin; my twin brother died at birth. My mother lost three children before me, but after I stayed; others did too. We, her surviving children, are more or less children of her old age. She died five years ago. Though advanced in age, we were bitter because she did not reap the fruit of her labour.

Her death was most painful to me as her first surviving child because I wasn’t in the position to take care of her like I should; instead of me taking care of her, reverse was the case.

I am not as brilliant as I would have loved to be, hence, I couldn’t go beyond secondary school, after which I proceeded to being an apprentice to become a fashion designer. It was during my apprenticeship that I met Kunle, who happened to be an only child of his mother.

We both loved each other so much, but the snag with my family was the fact that Kunle was a Christian, while I was a Muslim. Having lost our father years back, my late mother was liberal and allowed my relationship with Kunle to grow, but my fathers family was against it.

With my mother’s support, I had nothing to fear, I went ahead and married Kunle. Our wedding was the toast then and it was talked about for a long time. Kunle’s mother became my second mother, because she loved me just like she loved her son. I had the best of both families and our joy was crowned with the birth of my son, about one year after our wedding. Keji, came right on time, but unfortunately, my mother-in-law died when he was just three months old. Her death was devastating to all of us; she was such a nice soul, but life had to continue. as a result of her demise, I had to stop my internship and stayed back home to take care of my baby. To compensate me for this, Kunle gave me money to start a business of my choice and I decided to go into fabrics selling. The Lord blessed my business and before long, my business became a household name. I was making good money and my husband was doing well too.

Tragedy, however, struck when Kunle took ill five years into our marriage. He had kidney problem. I became devastated; we spent all our savings on him, but the cold hands of death snatched him eventually. I was shattered. I didn’t know how I survived the period. Idowu, my younger brother, was there for me; Alaba tried her best too. Idowu vowed to stand by me come what may, because he said if not for Kunle, he wouldn’t have been able to go to school and make anything out of life.

I had lost almost all my capital to my husband’s illness and his family members didn’t make life easy for me, because after his demise, they came and took everything we had. It became a big war and when the trouble became too much, I left the house he built for them and moved back to my father’s house.

My siblings had left the house, leaving me and my son at the mercy of my father’s younger brother, who had always lived with us. In no time, he too became an issue to contend with. He was always fighting me and making trouble with me. Living in the house became hell and because I was helpless, I took the only option I had; marrying my uncle’s friend, who had just lost his wife then.

I didn’t know what I was getting myself into. My younger brother was against this union. When I overturned all his arguments and reasons, he said it was just too soon after my husband’s death. I didn’t listen to him; I went ahead and began a second journey to hell.

Alhaji turned out to be a tyrant, who abused me in so many ways. He had children, who are grown-ups with his wife who left him before he married the woman, who died just before I married him. She had three children for him. Initially, he helped me with my son’s school fees, but later insisted that he should drop out of school. He enrolled him with a local Alfa, where he would learn Arabic and become a cleric. He said this was because he was the only son in the house as at that time. He had three daughters.

My brother was very angry with me for consenting to this arrangement for my son. He reminded me that my son’s families are not Muslims; more so, his own children would go to school while mine would remain an illiterate. He asked that I allow him take my son with him, but my husband refused. 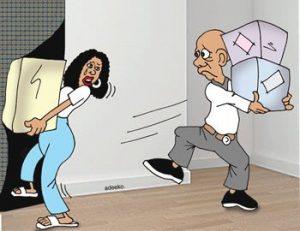 My husband was into a business which turned sour just before I married him, he refused to get a job or start another business except he was able to get a substantial amount of money, which was not forthcoming and so, the responsibility of feeding the house and family fell on my shoulders.

Everything I made from my business went into feeding him and his daughters. This particularly got my siblings angry and to crown it all, he would beat me up at any slight opportunity.

My brother had attempted to take me away from him several times, but I always pleaded that he would change. A few weeks ago, my brother went to check on my son at the Alfa’s place, he came back to tell me that he didn’t like what he saw. He said my son had been sick and had not received medical attention. He threatened to take him away from there if I didn’t do something.

I told my husband and he refused to allow me go and see my son. My brother eventually took him away from the Alfa’s house without telling me. When my husband learnt about this, he accused me of conniving with my brother to disobey him. I tried telling him that I didn’t know about this. He didn’t believe me, he beat me up severely and left me almost dead.

Neighbours took me to the hospital, where I spent over a week. He didn’t come over to see me. I had to plead with my siblings to help me settle my bills at the hospital. I am back in his house now, he has given me an ultimatum to take my son back to the Alfa’s house or leave his house. My siblings have refused to release my son to me, they have also given me an ultimatum to leave the marriage or forget about them and my son, saying after all, I have no children for him. Please, help me, what should I do?