This post is based on an email that was sent and in no way reflects the views and opinions of ''Met'' or Jamaicanmateyangroupie.com. To send in a story send your email to likeacopcar.78@gmail.com
October 18, 2014 8:35 am 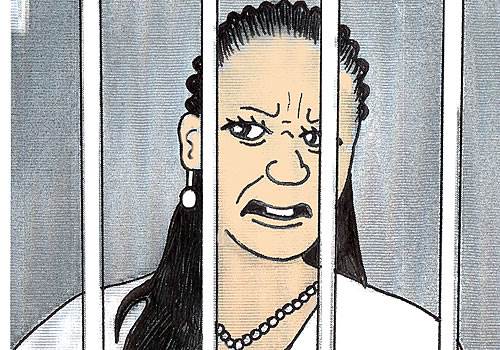 I am a regular reader of your column and after reading the story published in your column in the past two weeks, I became convinced that I really have to tell my own story too and I will appreciate words of advice and counsel from you and your teeming readers.

Just like the woman who wrote the last story, I am equally writing you on behalf of my daughter. I am a widow, I lost my husband when I was very young, I refused to remarry so I could take good care of my children. To the glory of God, till date, I have no regrets. God has been faithful and I have joy over my children except for my second child’s life that has become a source of concern to me.

Oladuni; not the name everyone knows her by, is the second of my four children and the prettiest. I wasn’t surprised when she found a man who would have married her as soon as she gained admission into the University of Lagos. She was sensible enough to ask him to wait till she finished from the university. Goke, her late husband, however couldn’t wait. They got married when she was in her final year in the University, while she was still quite young.

Her two daughters came in quick successions, but her joy and that of all of us was cut shot, when Goke lost his life in a car accident on his way back to Lagos. He was sent abroad for a course where he spent close to a year, in fact, their second daughter was born while he was away. Because he had to travel, he went to their hometown to see his mother and siblings when he came back.

Unfortunately, Goke did not return from the trip. He died on his way to Lagos. His death was devastating. The worst happened when his family members came to take his property. Fortunately, my daughter was his next of kin, so they could not lay their hands on his gratuity, but they gave her a tough time. Goke’s office tried and made sure my daughter got all her husband’s money.

With this, she was able to resettle and build a new house on the land her late husband bought for her, since his family asked her to vacate the one they lived in while he was alive. To the glory of God, she was coping and taking care of her children, but I was worried about her. She was too young to live her life alone, because whenever I spoke with her about another husband, she always had a ready reply and reference for me, which was of course, the fact that I raised the four of them alone after their father’s demise.

I didn’t want this type of life for her and I told her that much, whenever we had to talk about it. Eventually, she told me she found a man she wanted when her first daughter was 11, that was about eight years after Goke’s death. We were all happy for her; little did we know then, that she was going into bondage.

The first thing Frank her second husband did was to ask her to resign her work as he did not want a career woman as wife. Frank is from Auchi, he had been married, but his wife died leaving two children. He was a lot older than my daughter, but the fact that Oladuni agreed to remarry again made all of us over look this.

After she resigned from her job, he encouraged her to sell off her fourflat building in a Lagos suburb because he said it was too local a place for her to have a property. When she sold the property, she did not tell me or any of her siblings.

She gave the money to her husband who said he added some amount to buy a storey building close to their house for her and helped to open a hairdresser’s saloon for her at the building. It was later that my daughter told me that she was yet to see the documents of the building to see in whose name her husband bought it.

Despite the fact that she had a business she was supposed to be running, her husband does not allow her to leave the house. She employed stylists to work at the salon and the only time she was allowed to go there was when she had to pay her workers.

Because of lack of commitment and supervision, the salon collapsed in no time. When this happened, he quarreled with her. It was then that we all knew that he doesn’t allow her out of his sight and all she does was stay at home and cook his meals. Although his children are a lot older than my grand children, but he takes care of them like his own children. He sent them to good schools, but insisted that they must be in the boarding school. He forbade their mother from see them and if the children needed anything or during their visiting days, he went to see them alone. The children only get to see their mother when they come home on holidays. He doesn’t allow her to go out to functions alone, not even family outings and when it was compulsory they would have to go together. He will buy expensive clothes and jewelries for her and dress her up for people to see. But when she needs to spend a kobo, she would have to ask him for it. he made sure she had no independence, especially financial independence.

I was shocked that she didn’t open up to anyone about this all the while, until recently that he started beating her up for little or no provocation at all. He used to be buoyant with a good business, but in recent times, his business had problems and he didn’t have money as he used to do. He began to take his frustration out on my daughter and call her all sorts of names. She still didn’t open up to us until her step-son, who happened to be her husband’s first son, came to see me and told me all that their father had been doing to my daughter who they accepted as their own mother since their father married her.
ADVERTISEMENT

I invited my daughter to come and see me, but her husband wouldn’t allow her to come alone. When I saw her, I was very unhappy because she had lost all her shine and she looked a shadow of herself. Eventually, I was able to see her alone when her husband travelled out of town. To my dismay, I didn’t know that her gateman told her husband that she went out of the house. He instructed him to lock her out, until I called and told him that I asked my daughter to see me and if it was an offence.

With this, I became scared and apprehensive. What should I do and how will I get my daughter out of this marriage. I don’t know what is really happening, please. Help me.