This post is based on an email that was sent and in no way reflects the views and opinions of ''Met'' or Jamaicanmateyangroupie.com. To send in a story send your email to likeacopcar.78@gmail.com
June 14, 2014 9:38 am 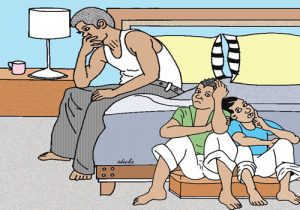 I am really in a dilemma and will appreciate your help and your readers too. A lot of things happen to us in life that we do not bargain for and I can say that most of the time, our plans and wish for a better tomorrow never works out.
ADVERTISEMENT

Or how will I describe a life without joy, happiness and fulfillment and every time I feel things are beginning to work out, it goes wrong again. I am really not asking for too much out of life. All I want is to have enough money which will enable me live well, a good family and to be able to give my children what death did not allow my own parents to give me and above all, peace of mind.

But to posterity, all these seem too much. Like I stated earlier, I lost my parents when I was rather young, my eldest brother who promised to take care of me and that I got educated couldn’t send me further when I finished my junior secondary school couldn’t send me to school again which left me alone to do my things my way.

I was on the street trying to survive on my own for over four years until the day I met a man who knew my parents when they were alive. He took me in as his son but told me without mincing words that he doesn’t have money to send me to school. He encouraged me to accompany him to his building sites; he was a bricklayer and from him, I was able to master the art of brick laying.

When I was done with learning, one of his sons took me with him to Lagos where I started surviving on my own too. It was while I was in Lagos that I learnt the art of laying inter-locking blocks and other things. I was really good at it and in no time, I started making money on my own which made living a little easy for me.

I rented my own apartment and started making plans to settle down with a woman I loved, raise a family and take care of my family as well.

I wasn’t too young at this time, I was 28. I had a lady I was dating then, she was a fashion designer apprentice. Because we were from the same town, her elder sister who she was living with like me welcomed me to visit her anytime. Due to our feelings for each other, we planned to get married as soon as she was through with her apprenticeship, which then was just about seven months.

During one of my visits to her house, I met a young girl from my town that was brought to Lagos by her aunty as a housemaid for a woman in the neighbourhood. She was being maltreated and abused so much that at that time she was contemplating suicide.

Some of us advised her to go back home, but when she told her story that both her parents are dead and it was her uncle’s wife who brought her to Lagos. We tried to trace her family, but couldn’t help trace her uncle’s family because the woman who brought her left after collecting her salary for the whole year.

Because the story of her life is similar to mine, I took pity on her and rendered any help I could. She knew where I lived and one night, she came and said she ran away from her mistress and she wouldn’t go back. I saw her body with different shapes and sizes of feltmarks, bruises and wound inflicted on her by her mistress.

I told my fiancé and her sister and they encouraged me to help her which I actually meant to do. She was also receptive, well behaved and good mannered. She desired to learn fashion designing too and it was generally decided that as soon as she was fully recuperated she would start her fashion school. She actually did start, and she was doing well.

Something, however, happened just about two months to when my fiancé was to finish her apprenticeship; I found out she was pregnant for another man. This really devastated me but fortunately, I had Iyanu (that’s the young girl’s name) to help me get over the hurt.

We became close like brother and sister and people who didn’t know her really called her my younger sister. We were living together peacefully and she was progressing in her training. I really didn’t know what happened this particular day, I came home from work after a very bad day; I lost some money and I felt bad. She was calmed me down and spoke with me with wisdom.

I cannot say what happened, but that night we had sex. I discovered that she was a virgin. I was sorry I did this to her, but she didn’t mind. I said it wouldn’t happen again, but as fate would have it, it did happen several other times at the end of which she became pregnant.

I was too ashamed and bothered by what happened that I had to send her to Ibadan to live with my eldest brother and wife. I had enough money, so her upkeep and other money I had to give her was no issue. Before she delivered our first child, my elder brother insisted that I must marry her properly. I wasn’t against this, but we tried locating her uncle who happened to be the only relative she knew, but we were unlucky.

She had our first child, a boy. Along the line, my brother insisted that I moved to Ibadan and settle down with my wife. Unfortunately, I did. I said unfortunately, because no sooner had I settled in Ibadan than my troubles started. First, I couldn’t get good business like I did in Lagos and all the while I was in Lagos, Iyanu who was supposed to be under the watchful eyes of my family members had made friends with the wrong set of people and my once peaceful and docile wife had turned into someone else.

We were still trying to sort ourselves out when she became pregnant with our second child. I am sorry to say this up till this moment, I still doubt the paternity of this boy as she gave birth to another boy.

When push came to shove, I gathered all the money I could and started an okada business. I don’t know what my being an okada operator did to my wife as she loathed me with all the dislikes in her. It was this time that she informed me that she had located her uncle. Despite all her negative behaviour and attitude, my relatives and I made plans to see her uncle, but instead of receiving us, her uncle flared up and insulted my people and I and threatened to take Iyanu away.

It was like her uncle’s attitude gave her the license to misbehave as she became more unruly and several times she would leave home and not return to sleep even with the small baby she was nursing.

Several times, I called to ask her what she actually wanted and if there was something I was doing that she didn’t like. Several times, I have also given her money to start businesses, but she ended up messing them up. My brother complained about her attitude several times and especially because I always took her back after she had been gone for days. My explanation was always the fact that I wanted her to look after her children.

She eventually went one day and didn’t return for almost two weeks. I looked everywhere and went to her uncle who said he also didn’t see her. Eventually, we learnt that she had been staying with her uncle who introduced her to a rich man who he wanted her to marry.

There was nothing I didn’t do to beg her to return home to us. At a level, my siblings quarreled with me and insisted that I shouldn’t take her back. She wasn’t also prepared to come back. My fears; however was how I would cope with taking care of my boys and also operate the okada business successfully. My elder brother decided that I should bring the boys to him. They stayed with him for three months and his wife asked me to come for my children.

I have however been trying to do all these together, until recently, that my first child became sick. I have to take care of him with my job. Because of his illness, I contacted their mother who for some time now has been communicating with me.

She has agreed to come back home, but my elder brother has insisted that she can’t come back. I am so confused, battling with my family demand, sick son and my wife’s return. I also learnt that she also is sick. Apart from the children’s issue, I still love my wife and will want her to come back, but my family is insisting that she cannot. What should I do?