This post is based on an email that was sent and in no way reflects the views and opinions of ''Met'' or Jamaicanmateyangroupie.com. To send in a story send your email to likeacopcar.78@gmail.com
June 4, 2016 10:31 am

THE WHITE POISON WE EAT EVERYDAY 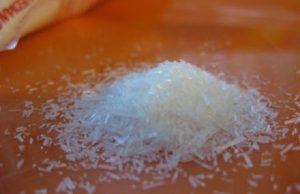 Here is how it looks like sodium glutamate E621 – an additive that is put in large amounts in almost all foods and is quite used in restaurants, and is added to intensify the flavor of food.

health (34)
White crystalline powder, resemble a salt and sugar. Aqueous solution of it has the taste of soup with meat. It can be added to any food. Sodium glutamate leads to increased appetite, overeating and obesity.
Used to stimulate the cells in the brain, the effect is like a drug penetrates easily in the blood and brain and leads to a change in the genes responsible for the sense of taste.
Sodium glutamate is contained in all the sausage, salami, frankfurters, chips, prepared soups, cans, beer and many others. Safety body dose for an adult is 1.5 grams per day for children – are not more than half a gram.
Today it is used about 200 thousand tons per year of this supplement in the whole world. Symptom of overdose E621 is called Chinese restaurant syndrome and could be dizziness, migraine, visual disturbances, hormonal imbalance, nausea, weakness, dizziness, chest pain, and more.
It was discovered in 1907 in Japan Ikeda Kikunae, which experiments revealed that the substance enhances the taste of food.
It not only enhances the natural flavor of the products, but also improves the taste and aroma of canning, fast food, frozen products.
During the experiments, the researchers added sodium glutamate in the diet of mice and they lost their eyesight.
One of the negative consequences of the use of sodium glutamate is that it affects the receptors of the tongue, which over time exacerbate the perception of food.
Often, because of glutamate that makes food very delicious, we cannot stop eating any harmful foods like chips, chocolates, prepared soups and more.
It causes addiction, so man unconsciously to prefer products that contain which is beneficial for producers since it increases their sales.
Remember!
Food manufacturers have benefit from using E621, because this supplement reduces the cost of production and “mask” the low quality goods or production, which should be repealed.
Be careful when choosing foods, read the information on the product packaging.
Use natural spices in cooking.