This post is based on an email that was sent and in no way reflects the views and opinions of ''Met'' or Jamaicanmateyangroupie.com. To send in a story send your email to likeacopcar.78@gmail.com
August 5, 2017 1:28 pm

FOR WOMEN WITH ANEMIA

For many women with fibroid, excess blood loss is a big challenge and a reason they develop anaemia. But, scientists have found sorghum bicolour an effective blood builder that can help them. 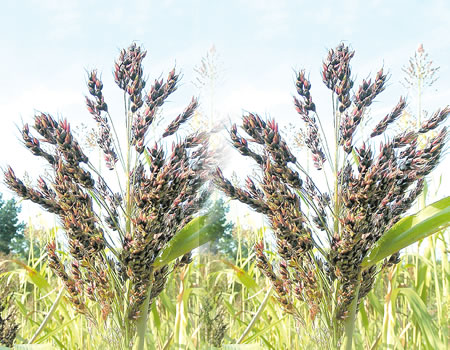 In a new study, scientists suggest that blood transfusion and surgery postponement can be avoided in an additional 15 per cent of patients due to sorghum bicolor.

In Nigerian languages, it is called okababa in Yoruba, dawa / jero in Hausa and sorgum in Igbo.

The study was to assess the blood building potentials of sorghum bicolor extract in anaemic women being prepared for fibroid surgery (myomectomy) at the Lagos State University Teaching Hospital (LASUTH).

The open-label, randomised, parallel-group comparative study of the efficacy of sorghum bicolor extract in preoperative anaemia was documented in the January, 2017 publication of the Nutrition Home.

The study recruited 73 non pregnant women aged between 18 and 50 years with fibroid preparing to have surgery at least a month earlier. Evidence of health problems like sickle cell disease, HIV, kidney impairment or chronic inflammatory disease were also ruled out.

Blood samples were taken at baseline and weekly for full blood cell count and liver and kidney function tests in this study that lasted for three weeks.

Extract of sorghum bicolor has been shown to have blood building (hemopoietic), immune-stimulating, and antioxidant effects in rats and in patients with HIV. Studies on its toxicity to different body systems have proved it safe also for human consumption.

From the study, participants who were administered the routine drugs alone showed no significant differences in white blood cell, platelet, or red blood cell counts while participants in the test group demonstrated significant increases in the red blood count and hemoglobin concentrations during the three-week treatment.

Among the participants in the control group, 75 per cent had an increase in Hct levels, whereas only 40 per cent could attain the recommended Hct level of 36 per cent for surgery.

Among the participants who had the extract added to their therapy, 80 per cent had an increase in Hct levels and 55 per cent could attain the recommended Hct level of 36 per cent.

Additionally, 15 per cent of selected patients, therefore, the study claimed would benefit from the addition of the sorghum bicolor extract to their hematinics to avoid blood transfusion, postponement of surgery, or erythropoietin injections.

From the study, the researchers inferred that the participants receiving sorghum bicolor extract would have had a greater increase in red blood cell indices if they had received more iron supplement because more Red blood cells would have been produced.

Moreover, they added, “The use of sorghum bicolor extract may be justified in resource-poor countries” where the cost of conventional blood building medications is deemed high.

In such conditions, the combination of phytomedicines with therapeutic routine in different clinical situations may be justified and may represent a significant and viable alternative, particularly in Nigeria where the flora is diverse and plentiful.

Likewise, researchers have in clinical studies shown that extracts of fluted pumpkin, cowhage or velvet bean and fig could be effectively used to improve blood count, as an alternative or compliment to blood transfusion, and heal anaemic conditions such as in sickle cell anaemia and malaria.

The study published in The Internet Journal of Alternative Medicine and another published in Tropical Journal of Pharmaceutical Research, reported two severely anaemic patients, whose parents refused blood transfusion and were subsequently managed with oral intakes of the fluted pumpkin vegetable extracts.

Fluted pumpkin is an indigenous pumpkin to the eastern parts of Nigeria. Usually, it is administered either as an extract obtained from blending or manually squeezing the soaked vegetable leaves in tepid water in order to extract the fluid, or it can be eaten as cooked vegetable.