This post is based on an email that was sent and in no way reflects the views and opinions of ''Met'' or Jamaicanmateyangroupie.com. To send in a story send your email to likeacopcar.78@gmail.com
August 18, 2015 6:32 pm

JOURNEY THROUGH THE AFRICAN ORISHAS ORUNMILA 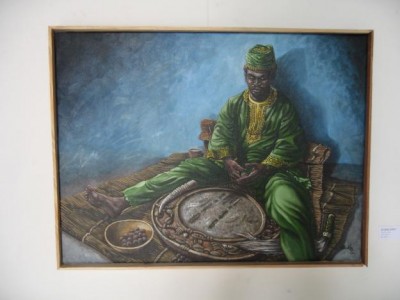 Orunmila is an Orisha. He is the great benefactor of the humanity and his main advisor. He reveals the future through the secrets of Ifa, the supreme oracle. He is also a great healer, and those who ignores his advices can undergo the ups and downs produced by Eshu.

Orunmila represents the wisdom, the intelligence, and the cleverness that can superpose the badly. When Oloddumare created the Universe, Orunmila was there like witness. It is why it knows the destiny to everything what exists. That is also why he is called the eleri-ipin ibikeji Olodurmare (Witness of all the creation and the second in charge after Olodumare).

Orunmila is the first prophet of the Yorùbá religion, sent by Olodumare to control the births, the deceases and the development of the human beings and other species. Fortune teller and owner of the Oracle and interpret of Ifá. He was in the Earth like prophet with the 16 celestial ancestors (the Meyi of Ifá), between 2000 and the 4000 year a.c. Its cult comes from Ilé Ifé and its name comes from the Yorùbá Òrúnmìlà (“Only the sky knows those who will be saved”).

It personifies the wisdom and the possibility of influencing the destiny, thus is most adverse. Those who doesn’t accept the advice of Orula, being men or Orishas, can be victims of the Osogbos sent by Eshu, close to Shango, who provided with the permission of Olofi the gift of adivination to him, and Eshu, it’s faiftfull ally. Orunmila forms an important trinity with Olofin and Oddúa (Oduduwa). Only those choosing by him can enter their cult through the “hand of Orula” (Awofakan) for the men and the Ikofafun, for the women. Women who receive him are considered women of Orula and receive the name of Apetebí, being this the most important consecration that a woman receives in the cult of Orula. In the case of the men they can arrive if Orunmila therefore decides them to be priests, in which case receive the name of Babalawo (Father of the secrets).

Orunla has the accumulated knowledge of the secret things of the human being and nature, as well as knowledge on the history of the humanity. In the human plane it represents the spiritualities of all the Awó of Orunmila. He is the governing Orisha and interpreter of the Odun of Ifá Oracle. Orunmila isn’t crowned as guardian Orisha and the Oracle only communicates through him. He enjoys the privilege to know the principle and origin all the things, including the Oshas and Orishas. He allows men to know their future and how to influence it. He is very related to Eshu and Osun.

Orunmila is present at the moment at which the spirit who is going to incarnate to an individual is choosing his destiny. It represents the security, the support and the consolation before the uncertainty of the life. With his aid everything is possible. Their priests should be organized, the most mystical and wisest ones. Eshu is its assistant. The priesthood of the Orisha Orula exists in the concept in which the priesthood to other Oshas and Orishas can exist with the difference of which he is exclusive for men and within these for people who do not fall in critical moment. The women can arrive until the consecration of Ikofafún and have the privilege of being listened with the more success than men; the women who are Apetebí Ayafá are the true owners of the foundation of Ifá of the priest who they attend.

Tools of Orula:
Two halves of a güiro that represent the sky and the earth, that can go within a wood tray. Their attributes are two hands of Ikines, one otá, a cedar small board, the board (Opón Ifá or Até Ifá), a carved horn (Irofá), a Iruke (horse tail), the Ekuele or rosary of Ifá, the Yefá or dust of Orula, a brush to clean the board, an Iddé, the necklaces. His necklace is made with yellow and green beads.

Power tools of Orunla:
The board of Ifa, which is used like percussion instrument in some ceremonies. Also an object done with horsehair called Iruke, which is used to move away the badly.

Dances of Orunla:
He does not have a dance since he does not lower, dances are made in his honor.

Attention to Orula:
Orunmila must go in a high place in the house. In order to take care of Orunla one is due to make with each new moon, greases butter of corojo in the left hand and honey in the right, the hands rub and the hand goes over Orula (to inkines or seeds of two in two). While this is happening 2 candles should be ignited to him. While rubbing you ask his favour and breath over him, you request firmness to him and that your mind has wisdom to take the correct ways. Fine flowers are put to him, fresh, sweet fruits fine, peanut, ñame, the cocconut, everything in even numbers. In order to take care of him it is suggested to have bathed to be clean.

Characteristic of the Omo Orunmila:
Calm, wise, given off and generous people. Spiritual guides par excellence, with a special intuition. By his spiritual character and pacific mood they tend to look for the calmness and inner growth.

Legeds and patakis of Orula:
When Obbatalá concluded the creation of the first man, Olofin summoned to all the Orishas so that they were present in the ceremony to give them the vital blowing. All knelt down and inclined their head at that sacred moment, only Orunla, to which Olofin took like assistant by his reputed seriousness and wisdom, could see how Olofin put the Eledá in Orí.

Finished the ceremony they celebrated the event, then Olofin considered: “Only Orunla was witness of the action that I have made, for that reason when the man wants to know his Eledá, he will be the one in charge to communicate it to him.”