This post is based on an email that was sent and in no way reflects the views and opinions of ''Met'' or Jamaicanmateyangroupie.com. To send in a story send your email to likeacopcar.78@gmail.com
August 31, 2015 7:14 pm

JOURNEY THROUGH THE AFRICAN ORISHAS…OGUN 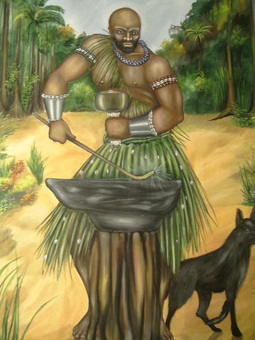 OGUN
“Ogun is able to remove obstacles out of our paths by his ability to break things down. He is the energy of analysis and scrutiny. Ogun uses his ability to get rid of obstacles that stand in the way of the flow of Ire into our lives; equally he removes obstructions in the flow of blood/light within our body temples. This signifies the symbiotic relationship that Ogun has with Osun. Osun is the energy that manages the flow of rivers and streams; much like the rivers of blood in our bodies and the stream of fortune that we desire in our lives. Ogun assist the work of Osun by removing any obstructions that may hinder her streams and rivers.”
Excerpt from “Grasping the Root of Divine Power”.
The energy of Orisha Ogun can be likened to Hercules, Ares, Mars, Ogu and just about any deity of warfare, technological advancement or of just expensiveness. Ogun means the owner of vitality. Ogun is known as the spirit of iron in Yoruba that is ‘irin’. Ogun is not a spirit that one invokes through iron. Iron is Ogun. Iron is a substance that exists within our bodies. Ogun represents the iron brute force that exists within the cosmos. He is the greatest, most powerful warrior of blood and he is one of the oldest Orisha. Where Shango (Ogun’s younger brother) is known to be the more skilled warrior, Ogun is considered the most powerful.

Ogun not only represents warfare and vitality, but also the building of civilizations. He is the acidic force of the cosmos, so Ogun is the analytical force of the galaxy, the ability to break things down and reusing them. Similar to Oya, he is a recycling energy. Ogun has also had connections with Oshun. The scholar will find that the war Orisha is related with almost all the other Orisha, since each Orisha has its warrior aspect.
Iron is a fixed material, one that can be relied upon. So Ogun is often depicted with two black dogs representing loyalty but also depending on the type of dog, a certain level of fierceness. Thus Ogun is known as the fiercest, oldest warrior but is also one of the most loyal Orisha that one can possibly work with.

With a prevalence e of infidelity in one’s life, Ogun is the energy to invoke, for balance. In Nigeria, when one goes into the courts of law, they swear upon a piece of iron, just to show how powerful the Ogun energy is. Ogun is the one to invoke in case of motor accidents. Usually he is invoked when going on long journeys. He is invoked in any situation involving blood or where any type of metal is to be used.
Ogun is the skeleton of society, the building block of a society initiative. Ogun is the energy of protection
Orisha Ogun Ritual –