This post is based on an email that was sent and in no way reflects the views and opinions of ''Met'' or Jamaicanmateyangroupie.com. To send in a story send your email to likeacopcar.78@gmail.com
August 25, 2015 5:52 pm 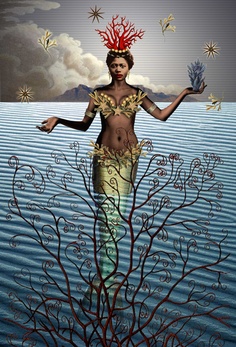 At once beautiful, protective, seductive, and dangerous, the water spirit Mami Wata (Mother Water) is celebrated throughout much of Africa and the African Atlantic. A rich array of arts surrounds her, as well as a host of other aquatic spirits–all honoring the essential, sacred nature of water. Mami Wata is often portrayed as a mermaid, a snake charmer, or a combination of both. She is widely believed to have “overseas” origins, and her depictions have been profoundly influenced by representations of ancient, indigenous African water spirits, European mermaids, Hindu gods and goddesses, and Christian and Muslim saints. She is not only sexy, jealous, and beguiling but also exists in the plural, as the mami watas and papi watas who comprise part of the vast and uncountable “school” of African water spirits.

Mami Wata: Arts for Water Spirits in Africa and its Diasporas
Mami Wata is a complex symbol with so many resonances that she feeds the imagination, generating, rather than limiting, meanings and significances. She is at once a nurturing mother; sexy mama; provider of riches; healer of physical and spiritual ills; and embodiment of dangers and desires, risks and challenges, dreams and aspirations, fears and forebodings. People are attracted to the seemingly endless possibilities she represents and, at the same time, frightened by her destructive potential. She inspires a vast array of emotions, attitudes, and actions among those who worship her, fear her, study her, and create works of art about her.

Often appearing with the head and torso of a woman and the tail of a fish, Mami Wata straddles earth and water, culture and nature. She may also take the form of a snake charmer, sometimes in combination with her mermaid attributes and sometimes separate from them. She can exist in the form of indigenous African water spirits known as mami watas and papi watas or assume aspects of a Hindu deity or a Christian saint without sacrificing her identity.

This section of the exhibition presents a broad overview of some of the movements, images, and ideas that have played major roles in the arts for Mami Wata. These include African images celebrating ancient and indigenous water spirits, global examples that demonstrate the transcultural nature of Mami Wata, and contemporary ideological and theological controversies concerning good and evil.

Mami Wata and the innumerable mami and papi wata spirits have many faces, and their identities rarely remain constant. As conditions change, so do the attributes, personalities, and actions of these fascinating and enigmatic water spirits. When taken together, the case studies presented in this section reveal striking differences, as well as remarkable similarities, in the beliefs and expressive arts for Mami Wata and her cohorts in Africa.

As with the arts dedicated to her, the worship of Mami Wata as a specific spiritual entity is not a unified, homogenous phenomenon. Instead, it reveals an extremely diverse and fluid set of beliefs and practices that both reflect and guide social and religious worlds. There are many expressions of Christianity, Islam, Judaism, Hinduism, Buddhism, and other faiths, and this is perhaps even more true of the worship of Mami Wata and water spirits in Africa.

Sacred waters bathe the histories of African peoples–waters of life, departure, and return. Sometimes they appear as tears of deep sorrow, sometimes as soothing and cooling streams sustaining existence and hope. Water connects world with otherworld, life with afterlife. Among Africans dispersed across vast oceans, these waters are emblematic of the ultimate journey back home to Africa and all those distant yet living ancestors. In Haiti, it is the journey home to Guinee across the rippling boundary of existence, imagined as a vast expanse of water that exists between life and afterlife. This is the abode of Lasirèn, La Baleine, Agwe, Simbi, Yemanja, Watra Mama, and all the water divinities of Africa and the African Atlantic. Their names are regularly invoked to strengthen the determination needed to endure the hardships and challenges of lives scattered and torn asunder by the avarice, arrogance, and brutality of those who would enslave others for their own benefit. The arts for African Atlantic gods and goddesses evoke complex emotions, hopes, and dreams as well as fears and nightmares. They may recall a sorrowful, troubled past, yet they offer hope and inspiration for a better future and the promise of an afterlife.