This post is based on an email that was sent and in no way reflects the views and opinions of ''Met'' or Jamaicanmateyangroupie.com. To send in a story send your email to likeacopcar.78@gmail.com
June 8, 2013 8:02 am 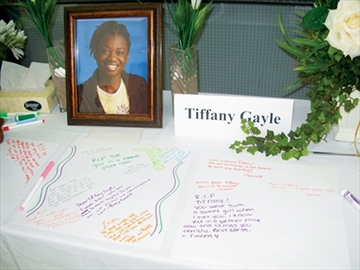 Brampton Guardian
A 15-year-old girl was found half-naked and beaten to death in the bloody basement bathtub of her Brampton home three years ago, the Crown has told a jury on the opening day of her parents’ first-degree murder trial.
The trial of Fedrick Gayle, 45, and Elizabeth Gayle, 46, got underway in a Brampton courtroom Thursday with an opening statement in which the Crown laid out its case. Both have pleaded not guilty.
The trial continues Friday in front of Madame Justice Katherine van Rensburg.
Assistant Crown Attorney Carson Coughlin told jurors the Crown will attempt to prove the teen was beaten to death with an aluminum baseball bat and a barbecue tool wielded by her father and step-mother. He said her death was “clearly murder” and that she was unlawfully confined during the beating, making it first-degree murder.
He told jurors forensic evidence in the case is extensive, involving blood splatter and stain analysis, footprint and handprint analysis, DNA and chemical analysis.
Coughlin told jurors Tiffany suffered massive blood loss, massive internal bleeding and multiple injuries. In describing briefly the severity of the injuries, he described to jurors how fat globules had been found projected onto the basement wall.
Two witnesses will testify for the Crown via video link from the victim’s native Jamaica during the trial, but her little brother, who was eight at the time, was sent back to Jamaica to live with their biological mother soon after the murder and he will not testify, Coughlin told the jury.
Coughlin told jurors Tiffany, a Grade 10 student at Fletcher’s Meadow Secondary School, was brought to Canada from Jamaica with her little brother and a sister to live with her father and step-mother.
“She came to Canada in search of a better quality of life,” he told the court.
The children, Coughlin said the Crown will show, were subjected to strict discipline and “corporal punishment”, and were not allowed to socialize with anyone after school hours, or answer the telephone.
They were threatened with being sent back home to Jamaica if they broke the rules, and other punishments included Tiffany being forced to sit in one place for a long period of time and only allowed to leave if given permission (called “spotting”) and losing use of her bedroom.
In the days before her death, she had broken the rules by borrowing a cellphone from a friend at school and calling her biological mother in Jamaica, Coughlin told jurors.
The Crown said evidence will show Tiffany believed she would be sent back to Jamaica at the end of the school year for being disrespectful to her parents, but she wanted to stay in Canada.
A friend of the family called her home and spoke to her step-mother about the situation.
Coughlin said the forensic evidence will reveal multiple strikes to her arms, legs and torso were administered in the family home’s garage, in the foyer of the basement, and in the basement bathroom where her body was eventually found in the tub.
The first witness called by the Crown was Peel Paramedic Cathy MacArthur who told jurors she was called to the house on a report of a 15-year-old without vital signs. When she arrived at 9 a.m., Tiffany’s half-sister opened the front door and directed her to the basement bathroom.
MacArthur told jurors she found Tiffany naked from the waist up, laying on her side in the bathtub, with clothes and blood on the floor and tub wall.
Rigor mortis had already set in, she testified.
“She had passed quite a while before we were called,” she said.
She said neither the half-sister nor Tiffany’s father, who appeared briefly after she arrived, accompanied her to the basement and neither exhibited any sense of urgency. She said both seemed “calm”.
MacArthur testified she was unable to determine who found Tiffany in the tub. The half-sister said she wasn’t home throughout the night because she was working the night shift at a local Tim Hortons.
The half-sister couldn’t remember which of her parents had picked her up and brought her home in the morning.
“She (the half-sister) seemed confused.”
The first Peel Regional Police officer on the scene was Const. Eric Anderson. He told the court he was eventually sent to the second floor master bedroom to stay with Fedrick and Elizabeth Gayle.
He testified they were both “distraught” when he entered the bedroom. Elizabeth Gayle was crying, Fedrick Gayle was repeating “Oh Jesus” and had called a friend to come to the house to speak with him.
The six-week trial continues today.