This post is based on an email that was sent and in no way reflects the views and opinions of ''Met'' or Jamaicanmateyangroupie.com. To send in a story send your email to likeacopcar.78@gmail.com
January 23, 2015 12:06 pm

KILLED WID HIM OWN GUN 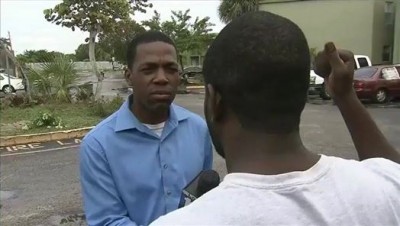 A man who said he was forced to shoot another man in self-defense spoke exclusively to Local 10 News.
Orine Edwards shot and killed Gregory Moore, 30, on Sunday evening in the courtyard of the Woodland Meadows apartment complex in Tamarac.
Edwards was initially unarmed but grabbed Moore’s pistol during a fight.
Edwards was at the complex to visit his girlfriend and stepped outside briefly while drinking a beer. That’s when he crossed paths with Moore, who he said first launched threats.”Somebody’s dead. I didn’t plan for it. I didn’t premeditate it. He hit me. He kicked me,” Edwards said, claiming the attack was unprovoked. “When he hit me again, I hold up the (beer) bottle to (hit) him and I see that he’s going to shoot me. He pointed the gun in my face and I dropped the (beer) bottle and put up my hands like this.”
“When he see me, he turned around and he said to me, ‘Didn’t I tell you, wherever I see you I’m going to shoot you in the face?'” Edwards said.
The threats turned physical when Moore pistol-whipped Edwards and pointed the gun at his head. “That’s when he kicked me and whatever happened, me and him started tussling and I don’t even remember how I get the gun, but for some reason I get it and I start running from him,” Edwards said. “All I wanted was for this man to do was just stop.”
Edwards, now in control of the other man’s gun, was chased and ultimately fired a single shot.
“I wasn’t even looking at him when I shot,” he said. “I just swing my hand like that because I was trying to get away.”
The bullet struck Moore, who died at the scene.
“Self-defense, no question,” Edwards said. “I didn’t run. After he got shot, I don’t know if he got shot in the chest — in the stomach — nowhere. I just know he got shot and fell and I asked somebody to call the police for me and I stood there and I didn’t run.”
Edwards believes jealousy may have been behind the attack. Edwards has been in a three-year relationship with a woman who once dated Moore. Romantic advances from Moore toward the woman never stopped, Edwards said.
Broward Sheriff’s Office homicide detectives interviewed Edwards for several hours but eventually let him go. Witnesses corroborate Edwards’ version of events.
Detectives told Local 10 that the investigation is ongoing, but Edwards is not facing any charges at this time.