This post is based on an email that was sent and in no way reflects the views and opinions of ''Met'' or Jamaicanmateyangroupie.com. To send in a story send your email to likeacopcar.78@gmail.com
February 11, 2015 3:12 pm 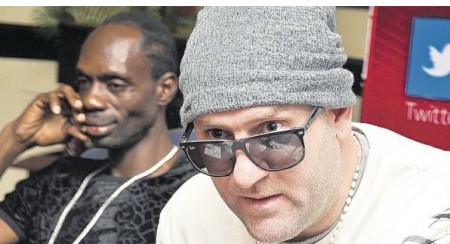 FIFTEEN years is a lot of time to be absent from the music business. However, Canadian dancehall artiste Snow is not perturbed. He is in Jamaica for two weeks to kick-start his career and promote his single Shame.

“Everywhere I went in the Jamaican communities in Toronto, people were saying ‘Snow, you got come down’. So I just said ‘lemme get focused and get serious’. So I’m here, I hope to do some recordings… I would love to work with Ninja Man. I’m here to catch a vibe again,” he said.

Snow, 45, arrived in the island on Monday. His first stop was the Jamaica Observer office on Beechwood Avenue in St Andrew. Accompanying him was veteran deejay Ninja Man.

Released in the last quarter of 2014, Shame is a collab effort with former Black Uhuru singer Mykal Rose. The track is produced by Florida-based Kent Jones and Cool & Dre.

“Shame is about where I was in my life emotionally,” he said.

Snow (given name Darrin Kenneth O’Brien) said his disappearance from the ‘game’ was due to personal challenges.

He said not being able to travel to America since 1993 negatively affected his career.

“The Internet was not as big as it was today and America was the biggest market for dancehall. They were not playing my songs as they would have if I was touring. That really hurt my career,” he said.

With all that behind him and now armed with a US visa, Snow said he is ready to reclaim his place among dancehall greats.

In 1993, he scored big with Informer. The single peaked at number one on the US Billboard Hot 100. A second single, Girl I’ve Been Hurt, reached Number 19 on the Hot 100. Two years later, he also scored big with Anything For You, which featured several local acts including Nadine Sutherland, Buju Banton, Beenie Man and Terror Fabulous.

Snow said he is pleased with the growth of reggae acts in Canada, especially the group Magic!

“Magic! is great. I love them. It doesn’t matter where you’re from. If you do it from the heart, it’s good enough for me,” he said.

The Toronto-based group Magic! scored big last year with their debut single Rude. The group earned a spot on the annual Jamaica Jazz and Blues Festival held at the Trelawny Multi-Purpose Stadium late last month. Snow said he is a fan of reggae singers Gyptian and Jah Cure.