This post is based on an email that was sent and in no way reflects the views and opinions of ''Met'' or Jamaicanmateyangroupie.com. To send in a story send your email to likeacopcar.78@gmail.com
November 11, 2014 8:05 am 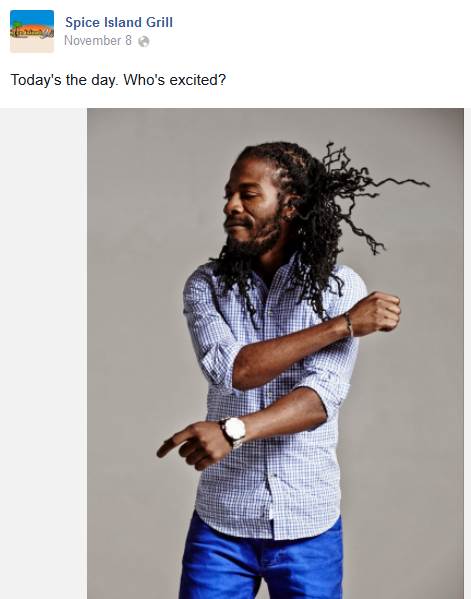 First, Presentation1.jpgI would like to sincerely apologize to everyone for the turn of events on Saturday, Nov. 8, during the Fall Reggae Concert featuring Gyptian, at the Stargazers Theater and Event Center.

I must confess, I was one of his biggest fans. I would fall asleep listening to this artist on YouTube. The thought of booking him to come to Colorado Springs, so that all his fans could share in the experience was a dream comes true, for me and my husband. Then he showed up, and my dream along with that of a lot of his fans, turned into a nightmare.

I felt as if at any moment I would wake up from this nightmare. Nothing was making sense. Yes, I’ll confess, I am not a professional promoter. My husband and I does this because, we love the music, love the food and love our Jamaican culture. We are happy to share this with our patrons who equally love reggae music, the food and the culture. So that, you can understand my shock, here’s a bit of my history.

In the past, I’ve worked with international superstars, to include Reggae Ambassadors, Third World; Everton Blender and Frankie Paul. I’ve met Pressure Busspipe to name a few, and I must say these are the most humble, respectful artists I’ve had the pleasure to meet and work with. Also, during my 24-years in the military I’ve worked with Admirals and Generals, met the President personally, interacted and worked closely with international dignitaries, and I have never met such arrogance and disrespect.

Now, back to the reason for being shocked, after performing for only 30-minutes, the fans disappointed and asking questions, I went to the green room to check if he was going back on stage.
After, a few exchanges with a member on Gyptian’s team, the artist suddenly flew off the handle, got angry and started to spew profanity.

His quote exactly, “Who is this *@#$ woman come talking to me. Go and suck out your mother and don’t come here talking to me.” This was witnessed by some of his fans, waiting to take pictures. Granted, I approached him as the promoter who is concerned. He stormed out of the building with no regard to the respect to his fans, spewing profanity.

Immediately, I realized his immaturity and that he operates purely from fear and the egotistical self. In Jamaica those insults are usually used by elementary kids, who are a not mature enough to engage in more civil disagreements. Adults use it because they are not educated enough, in the art of reasoning and handling situations on a mature level. I immediately, sensed that this artist cares nothing about his fans, or himself, but only about how others perceive him as this great “International Superstar.”

Due to his late appearance, we had to refund more than $1,300 in tickets prior to him showing up, however, unfortunately we are not able to make any refunds thereafter, because everything was paid out to the artist as contractual obligation.

We are still trying to wrap our heads around the events of the evening and what transpired. One conclusion/consensus, those closest to the event felt, is this may be a deliberate act of sabotage or disrespect. It appears, the Gyptian team deliberately tried to sabotage and discredit Spice Island Grill and the Stargazers Theater and Event Center business.

With much anticipation we coordinated this event together, so that it would be a great experience for you, the patrons. However, it seemed at every turn the artist, Gyptian, and his booking agent Rahim Visram @ Edge_Agency did everything to sabotage this event.

We spent the last two days asking the why questions? We ask the manager, as professionals who travel extensively, why didn’t they book their flight earlier so they could build time in for delays? Why didn’t they show up on time for the event? Why Gyptian and his team did not care enough about their fans to apologize and explain their delays? Why did he blame the sound system, when they didn’t arrive at the venue in advance to perform a sound check? Why was his (Gyptian’s) DJ not very knowledgeable about tuning a sound system? And, the biggest Why is – after showing 3-hours late he only performed for 30 minutes?

My un-objective answer — he doesn’t respect his fans, the promoter, the venue, his manager, and most of all himself. In my opinion, I think he is a con-reggae-artist, using his fans and inexperienced promoters to pursue his own agenda. He promoted himself as an international superstar, but upon meeting him you can see he has no respect for himself, females or his fans. The fans waiting in line for his autograph on Nov. 8, was witness, and can attest to the uncouth behavior he displayed.

In order to keep the story brief, I must end with just the sheer disappointment that everyone feels. The anticipation and joy everyone felt leading up to that moment when he would arrive. And, just the let down and disappointment everyone sensed by his character and behavior.
Again, we sincerely apologize for the debacle of the night. I can assure you that the Stargazers Theater and Event staff and the Spice Island Grill staff went above and beyond to ensure everything went smoothly.

But, the question still remains, why did the Gyptian’s staff go out of their way to disappoint their fans, sabotage the promoter, and disrespect the event center staff?

Bottomline, he was paid $5,500 for appearance fees, was booked in one of the best hotels (a suite at the Antlers Hilton Hotel) he got the best weed (because apparently he couldn’t perform without it). After arriving 3-hours late, to fans eagerly waiting, his biggest displeasure with the venue is that there wasn’t enough liquor, with the proper glasses, in the green room.

To express my disappointment and frustration, I would say my advice, to you Con-Reggae-Artist, Gyptian is, “Go to hell.” In my opinion, you are an international thug. You are a disappointment to your country, the one I love, your fans and yourself. Get your head out of your ass and learn to be a person with a heart, first, and remember that the fans are the ones who make you who you are today.

Note: The views expressed are the sole opinion of the writer and are not necessarily the views of the Spice Island Grill and the Stargazers Theater and Event Center staff.
Posted by Spice Island Grill at 3:19 PM
http://spiceislandgril.blogspot.com/2014/11/what-happenswhen-artists-forget-where.html
No comments: