This post is based on an email that was sent and in no way reflects the views and opinions of ''Met'' or Jamaicanmateyangroupie.com. To send in a story send your email to likeacopcar.78@gmail.com
August 6, 2016 8:43 am

OTTEY WAS THE GREATEST FI TRUE

Despite defeating her in the 200m final at the 1996 Atlanta Olympics, Frenchwoman Marie Jose Perec believes Jamaica’s Merlene Ottey is the greatest sprinter of all time.

Perec, the 400m at the 1992 Olympic Games, stepped down to the 200m at the 1996 Atlanta Olympics and used her quartermile strength to catch Ottey close to home.

Ottey started best in the final and led from Chandra Sturrup of the Bahamas coming into the straight. But the lanky Perec, who was fifth turning into the straight, used her finishing power and giant strides to cut down the field, catching the tiring Ottey with 15 metres out and eventually won going away by a metre.

“For me, it’s the great moment of track and field because Merlene Ottey, for me, was the best woman sprinter ever,” Perec told the Jamaica Observer yesterday. 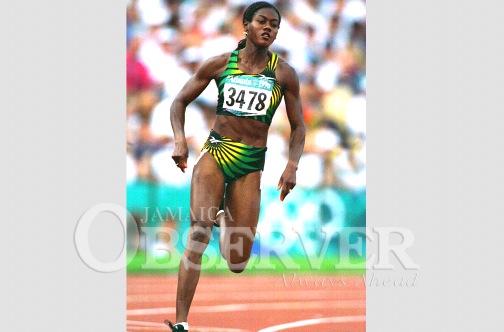 Perec had already retained her 400m crown winning in an Olympic record time of 48.25 seconds, a mark that still stands 20 years after and her victory over Ottey in the 200m. That achievement made the elegant-striding French woman the second female to achieve the Olympic 200 metre/400-metre golden double. American Valerie Brisco-Hooks was the first in 1984.

“I have mixed feelings when I think about Atlanta ‘96 because I won the 200m, but actually I was happy because I won, but kind of sad because I love Merlene Ottey,” she said gleefully.

Ottey, one of the most decorated female sprinters whose nine medals are the most by an individual, never won that elusive individual gold medal over seven Olympic Games. She competed for Jamaica between 1980-2000 and then Slovenia in 2004.

“She was my idol and I felt like I stole something from her. It’s crazy because when you come to this kind of competition, even though you admire someone, you need to do what you came to do. The feeling was mixed,” Perec pointed out.