This post is based on an email that was sent and in no way reflects the views and opinions of ''Met'' or Jamaicanmateyangroupie.com. To send in a story send your email to likeacopcar.78@gmail.com
August 30, 2016 7:15 am 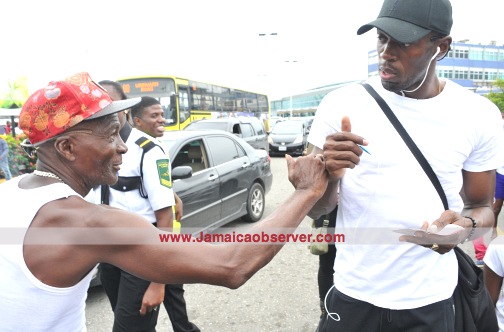 Jamaican sprint legend Usain Bolt made a quiet return to the island yesterday following a reported business trip to England where he was for the last few days after completing history at the 2016 Olympic Games in Brazil.

The low-profile arrival at the Norman Manley International Airport was in stark contrast to the electric and storied performances in Rio de Janeiro, where Bolt accomplished the unprecedented “triple-triple”.

But as people in the waiting area recognised the world record holder and began to shout his name, he shook off the poker face, acknowledged the praises with the odd smile, and even allowed a handful of hasty selfie photographs to be taken with cellphone cameras.

The multiple World Championships gold medal winner stuck around long enough for his luggage to be packed into the back of a black Toyota Tundra pick-up truck.

The sprint ace then hopped into a black Range Rover SUV driven by his executive manager and close friend Nugent Walker, and had a final chuckle at something a fan said before being raced away.

Bolt imperiously cantered to victories in the 100-metre, 200m and 4x100m events to reaffirm his status as track and field’s greatest athlete.

He sealed the treble of gold medals in Rio when he anchored the 4x100m team – which also included Asafa Powell, Yohan Blake, Nickel Ashmeade – to a season best 37.27 in the final.

Bolt, who is from Sherwood Content in Trelawny, has never lost a final at a major global championship. His sole hiccup came in the 2011 World Championships in Daegu, South Korea, when he false-started in the 100m final.

Bolt has said the 2016 Games will be his last Olympics, but he is expected to compete at next year’s World Championships in London.