This post is based on an email that was sent and in no way reflects the views and opinions of ''Met'' or Jamaicanmateyangroupie.com. To send in a story send your email to likeacopcar.78@gmail.com
July 24, 2016 9:33 am

Marie-Josee Ta Lou of the Ivory Coast set a personal best of 10.96 seconds to upstage Jamaica’s Shelly-Ann Fraser-Pryce yesterday in the women’s 100m at the Diamond League event.

Britain’s double Olympic champion Mo Farah produced a devastating 5,000m display to prove he is in top form heading into the Rio Olympics.

The 33-year-old showed exactly why he is the favourite to defend his two Olympic titles in Brazil next month with a stunning example of speed and stamina at the Olympic stadium. 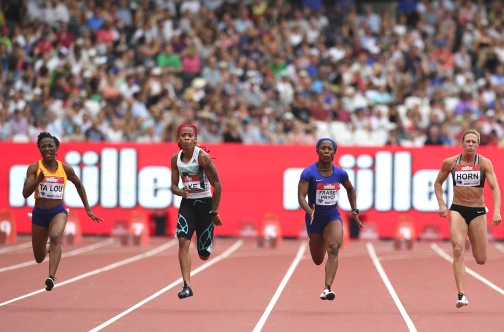 His time of 12 minutes and 59.29 seconds was the fastest mark of the year, and the fourth time in his career that he has dipped under 13 minutes.

Most ominously for those trying to catch him, particularly the Kenyans, this was his fastest time in the discipline since before the London 2012 Olympics.

Farah made his move after 3600m and never looked back, making the final 1400m appear almost like celebratory laps of honour. He crossed the finishing line by doing his trademark Mobot celebration.

“This is amazing, I got amazing support from the crowd,” said Farah. “I wanted to do it for them.

“This is my last chance before Rio, this track has so much meaning to me. Not many athletes can do it in their hometown.

“This is my best form (heading into a major event). I am in good shape. I have to keep my feet on the ground. Anything can happen over the next two-and-a-half weeks. I have to stay patient and cool.”

Dutchwoman Dafne Schippers consolidated her position as the number one sprinter in the Diamond League format by winning the women’s 200m.

The world champion, who ran the third-fastest time in history in Beijing last year, crossed the line in 22.13sec – half-a-second ahead of American Tiffany Townsend.

Schippers, who ran into a 0.8m/s headwind, said: “The main thing is to win the race, not the time. The times will come in Rio.

“I can handle the (favourite’s) tag. I am never nervous, which is good for me.”

The British Anguillan-born Shara Proctor was second with a 2016 best of 6.80m, while Ennis-Hill was seventh out of the eight competitors.

It was a frustrating day for Ennis-Hill, with her Olympic heptathlon title defence on the horizon.

“I would have liked to have got closer to my PB and taken some confidence from the long jump but it reminds me that there is still a bit of work to do. I have to keep focused and work hard,” Ennis-Hill, 30, said.

“I think I just need to sharpen up now, I’ll go into the heptathlon fresh. I will go and concentrate on the job in hand. These will be my last Olympics, so I just want to enjoy it.”

Another Briton, Matthew Hudson-Smith, was victorious in the men’s 400m in 45.03sec, while there was even more for the home fans to cheer as their men’s 4x100m relay squad produced the best time of the year.

Kerron Clement of the US edged out Puerto Rican Javier Culson in the men’s 400m hurdles with a season’s best of 48.40sec.