This post is based on an email that was sent and in no way reflects the views and opinions of ''Met'' or Jamaicanmateyangroupie.com. To send in a story send your email to likeacopcar.78@gmail.com
August 10, 2016 4:42 pm 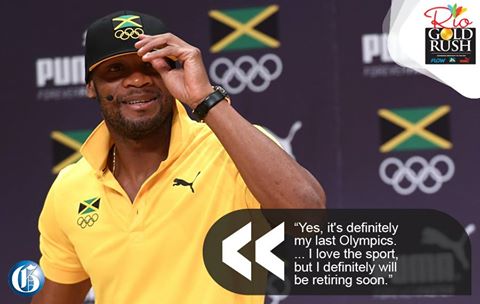 He’ll go down in history as one of the fastest human beings. But Jamaican sprinter, Asafa Powell, will end his career without an individual Olympic medal.

Powell confirmed that the Rio 2016 Games will be his last and with the 33-year-old failing to get on the podium in the 100m at his three previous appearances at the Olympic Games in Athens (2004), Beijing (2008), and London (2012), it will be the end of his Olympic chapter.

The sprinter will only compete in the 4x100m relay here in a rather anti-climactic end for a man who twice broke the 100m world record and is widely regarded as one of the most naturally gifted sprinters of all time.

However, he made it clear that though his retirement is in sight, he is not quite ready to hang up his spikes just yet.

“Yes, it’s definitely my last Olympics,” Powell said. “I’m not going so far, I love the sport, but I definitely will be retiring soon. I don’t know when yet, but I certainly won’t be running until I’m 40; my legs can’t hold up that long.

“I have been around for a very long time, and people always ask how I manage to stay in the mix for such a long time, but it’s just the love. I love the sport and I try my best to continue competing at a high level, and I love my country as well,” added the two-time World Championships 100m bronze medal winner.

Powell went on to admit that he is very disappointed that he won’t be competing in the 100m.

“Yes, I’m very disappointed that I am not able to compete in the individual event. This is the first time competing on a team and I’m not doing an individual event, but I am here to support and to give the team my best in the relay,” Powell said.

His Olympic legacy is, however, more positive in the sprint relay, with him running anchor as Jamaica smashed the then 4x100m world record with a 37.10 win in Beijing.

“We have a great team here. Every time we go out on the track, we are capable of creating history. We are a team – the chemistry between the guys, the unity between us – I think that’s what makes us so good,” Powell said.