This post is based on an email that was sent and in no way reflects the views and opinions of ''Met'' or Jamaicanmateyangroupie.com. To send in a story send your email to likeacopcar.78@gmail.com
January 6, 2016 7:52 am

French satirical magazine Charlie Hebdo’s anniversary edition featuring a gun-wielding God has elicited criticism from the Vatican’s newspaper. The Vatican daily L’Osservatore Romano (The Roman Observer) said in an editorial Tuesday that the cartoon shows the world’s sad paradox of being politically correct but still disrespectful of believers.

The magazine’s special edition, marking the one-year anniversary of a terror attack on Charlie Hebdo’s offices, will hit France’s newsstands Wednesday with its cover carrying a cartoon of a bearded man representing God with a Kalashnikov hanging over his shoulder. The cartoon is accompanied with a text reading: “One year on: The assassin is still out there.” One million copies of the special edition will be sold across the country and over thousands will be sent overseas. 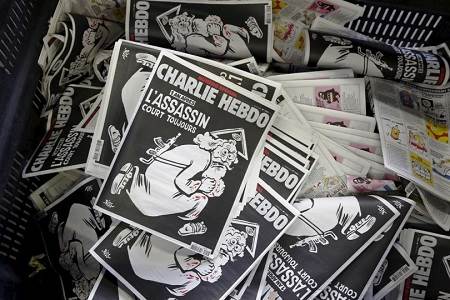 “Behind the deceptive flag of uncompromising secularism, the weekly is forgetting once more what religious leaders of every faith unceasingly repeat to reject violence in the name of religion — using God to justify hatred is a genuine blasphemy, as Pope Francis has said several times,” the newspaper said, according to Agence France-Presse.

“In Charlie Hebdo’s choice, there is the sad paradox of a world which is more and more sensitive about being politically correct, almost to the point of ridicule, yet does not wish to acknowledge or to respect believers’ faith in God, regardless of the religion,” the daily reportedly added.

On Jan. 7, 2015, gunmen stormed in Charlie Hebdo’s offices and shot 12 people, including eight of its staff, reportedly in retaliation to the magazine’s satirical depictions of Prophet Muhammad. The special edition will also feature a collection of cartoons by the five Charlie Hebdo artists killed in the attack as well as several other contributors.

Cartoonist Laurent “Riss” Sourisseau, who was injured in the terror attack, took over management of the magazine following the incident. He has written a commentary in the special edition in support of secularism. In the editorial, he reportedly condemned “fanatics brutalized by the Quran” along with those from other religions who hoped for the death of the magazine for “daring to laugh at the religious.”