This post is based on an email that was sent and in no way reflects the views and opinions of ''Met'' or Jamaicanmateyangroupie.com. To send in a story send your email to likeacopcar.78@gmail.com
October 9, 2016 12:12 pm

TRUMP AT IT AGAIN THIS MORNING

Donald Trump hunkered down Sunday morning— pulling back top aides from planned national appearances — while previewing a vicious attack on tonight’s debate stage, targeting Bill Clinton’s past infidelities and Hillary Clinton’s alleged bullying of his victims.
Only Rudy Giuliani was dispatched to inject the Trump campaign’s position into the national conversation during a round of Sunday morning news shows. Giuliani condemned Trump’s description of making unwanted sexual advances against women — kissing and groping them — but also dismissed them as “talk” among men, and he attempted to pivot quickly to national issues.
Story Continued Below

“You know, you confess your sins and you make a firm resolution not to commit that sin again and the priest gives you absolution and then hopefully you’re a changed person,” he said. “I mean, we believe that people in this country can change.”
But even as Giuliani spoke, Trump signaled a potentially dark turn for the day leading into his second debate with Hillary Clinton, tweeting out a Breitbart interview with Bill Clinton rape accuser Juanita Broaddrick and swiping at Republicans who have begun to reject his candidacy.
“Tremendous support (except for some Republican ‘leadership’). Thank you,” he wrote. He later tweeted, “So many self-righteous hypocrites. Watch their poll numbers – and elections – go down!”
Trump caught on tape making crude, demeaning comments about women 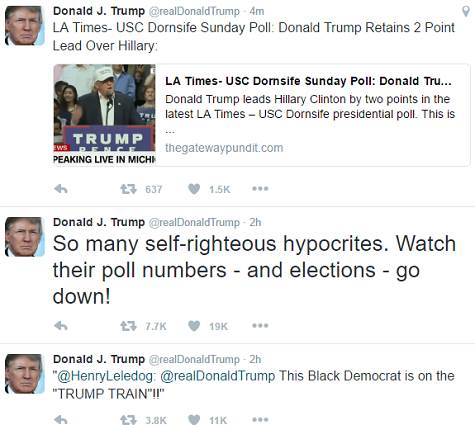 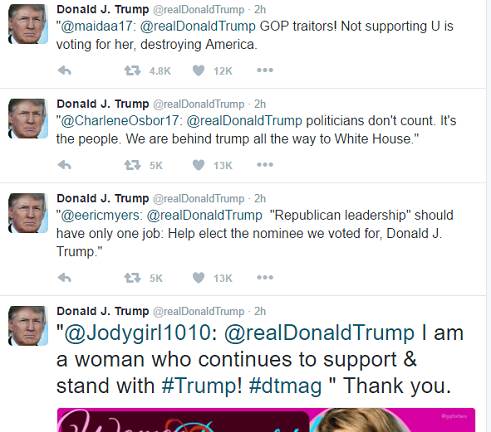 The campaign began the day by pulling back planned Sunday show appearances from campaign manager Kellyanne Conway and Republican National Committee Chairman Reince Priebus. Giuliani said on Fox News Sunday that Conway is still a strong Trump supporter and attributed her absence to “scheduling.” Giuliani said none of Trump’s inner circle would defend his comments but said his apology should be viewed as sincere – and that he’s likely to reissue it in the debate.
“I think he made a full and complete apology for it,” he said. “I think he’s going to do it again tonight.”

But Giuliani also struggled to defend Trump when pressed by CNN’s Jake Tapper.
“This is talk, and gosh almighty, he who hasn’t sinned, throw the first stone,” Giuliani said during a discussion of the 2005 Access Hollywood” tape on which Trump can be heard bragging about trying to sleep with a married women and forcing himself on women who he said don’t resist because of he’s “a star.”
“Mr. Mayor, I have never said that, I have never done that,” Tapper interjects. “I am happy to throw a stone. I have been in locker rooms, I have been a member of a fraternity. I have never heard any woman, ever, brag about being able to maul women because they get away with it.”

Democrats on Sunday also piled on Trump. Interim Democratic National Committee Chairwoman Donna Brazile on ABC’s “This Week” said that, despite the tape being more than 10 years old, truly reflects the real Trump.
“You can draw a straight line between what Donald Trump said in 2005 and what he’s been saying every day on the campaign trail over the last year and a half,” she said.
And Hillary Clinton’s running mate Tim Kaine said he isn’t sure if Clinton will bring up the video but added that participants in tonight’s townhall debate likely will.
“It’s really for Donald Trump to try to answer for it and take responsibility for it,” Kaine said on CNN. “It’s not just words, it really is… talking about a pattern of sexual assault.”
The Sunday morning was dominated by the news of Republicans bailing on Trump. A cascade of elected leaders – from deep red-state senators like Idaho’s Mike Crapo to those in tough reelection fights like New Hampshire’s Kelly Ayotte – indicated they could no longer back him and would prefer he step aside for a new nominee like his running mate Mike Pence. Trump’s campaign was reportedly preparing to counterpunch forcefully Sunday. A New York Times reporter revealed that Trump surrogates had received talking points urging them to slam Republicans who break from Trump.
10_hillary_clinton_4_gty_1160.jpg
2016
Clinton team girds for all-out assault
By ANNIE KARNI
The controversy also overshadowed revelations in a new batch of leaked emails, allegedly from the personal account of Clinton adviser John Podesta, that included excerpts from Clinton’s paid speeches to Wall Street institutions. They included her suggestion about having different positions on issues in public and private, as well as her call for “open borders” trade within the hemisphere.
Podesta, speaking on Fox News Sunday, wouldn’t acknowledge whether the emails were authentic, though he has acknowledged being hacked and has blamed the breach on Russian meddling on behalf of Republicans.
“You can pluck a few words — if that’s what she did say — out of context,” he said.