This post is based on an email that was sent and in no way reflects the views and opinions of ''Met'' or Jamaicanmateyangroupie.com. To send in a story send your email to likeacopcar.78@gmail.com
January 26, 2015 3:42 pm 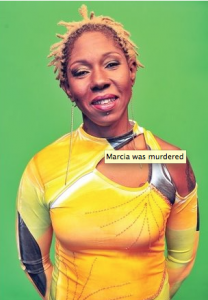 According to the Trinidad Express News personality Marcia Henville was murdered. An autopsy today found that she had been beaten on the head, stabbed about the body, and her throat slit.

The autopsy was done by pathologist Dr Eslyn McDonald Burris. Henville’s son was at the Forensic Science Centre, and collected the autopsy report.

Henville’s burnt body was found in the bedroom of the family home at Fidelis Heights,St Augustine last Saturday morning.

Police and fire fighters had responded to a report of a fire at Henville’s house, where she lived with her husband and two children.

Her body was found in a bedroom. Resident said they heard arguments
before the fire, which was confined to the bedroom. Henville’s husband reportedly suffered burns in the bedroom fire, and is being treated at hospital.