This post is based on an email that was sent and in no way reflects the views and opinions of ''Met'' or Jamaicanmateyangroupie.com. To send in a story send your email to likeacopcar.78@gmail.com
June 7, 2016 7:48 pm

A London court handed 22 life sentences to a man Monday after he pleaded guilty to 71 child abuse offenses while in Southeast Asia. 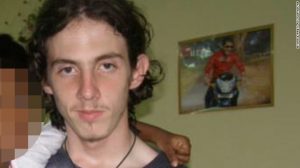 Richard Huckle, 30, was arrested at Gatwick Airport near London in 2014 as he returned home from Malaysia, where he committed most of his crimes, Britain’s National Crime Agency said.

He confessed to abusing almost 200 children on a blog he published on the dark web, an area of the Internet not easily accessible to the general user.
Chemical castration for child sex abusers in Indonesia
According to Court News UK, Huckle posed as a Christian English teacher to groom and abuse children, including one as young a 6 months, in a poor Malaysian community over nine years.
He also committed child abuse in Cambodia, the National Crime Agency said. British law allows nationals to be prosecuted in their home country for offenses committed abroad.
The court heard the amateur photographer took pictures and videos of himself raping children that he groomed from schools and orphanages, and shared the images with other pedophiles on the dark web, according to Court News UK.
In his blog, Huckle awarded himself “Pedopoints” on a type of scorecard, claiming to have abused 191 children, according to Court News.
Huckle then tried to monetize his behavior, accepting bitcoin, the online currency, to continue the abuse and publish it online, Court News said.
He forced victims to pose with signs to advertise his business and wrote a 60-page guide entitled “Pedophiles & Poverty: Child Lover Guide” that the judge called a “truly evil document,” Court News said.
Huckle was caught when Australian police tipped off authorities in an investigation into a pedophile website that officials said had 9,000 members before it was shut down.
The NCA said officials had recovered more than 20,000 indecent images of children from Huckle’s computers and cameras, including more than 1,000 of which showed him raping and abusing children in his care.
“Richard Huckle spent several years integrating himself into the community in which he lived, making himself a trusted figure. But he abused that trust in the worst possible way,” said James Traynor from the NCA’s Child Exploitation and Online Protection Center.
“He deliberately traveled to a part of the world where he thought he could abuse vulnerable children without being caught,” he said.
“Borders are no barrier — we are determined that those who go abroad to abuse children will be held to account.”
Huckle, who is from Ashford, Kent, has been ordered to serve at least 25 years of his sentence.
The court heard about several horrific cases of Huckle’s abuse, including that of a 5-year-old girl on her birthday at his home, the NCA said, adding that Huckle offered private English language tuition to earn the trust of children and their families.
Huckle traveled in and out of Asia over many years, in 2006 spending two weeks in Cambodia, staying with a local family, whose 3-year-old child was one of his victims, the NCA said.
In 2007, he returned to Malaysia and stayed with the family of two young girls, taking up a voluntary teaching post at a small tuition center in the village, the NCA said. It said he abused the girls over eight years.