This post is based on an email that was sent and in no way reflects the views and opinions of ''Met'' or Jamaicanmateyangroupie.com. To send in a story send your email to likeacopcar.78@gmail.com
February 1, 2015 8:46 am 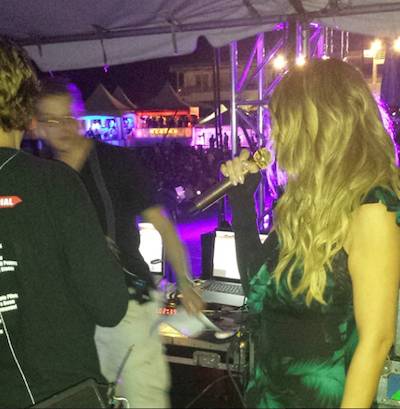 SHE was the biggest drawing card at the this year’s staging of Jamaica Jazz and Blues Festival, but the jury is still out regarding the performance of songstress Mariah Carey on Friday night’s staging of the event.

A sizeable audience filed into the Trelawny Multi-purpose Stadium from early evening to get pole positions to view the set of one of the most successful vocalists in music history. But at the end of the night, the responses were mixed to what unfolded on stage.

Carey hit the stage armed with her golden microphone and wearing the first of her four costume changes, to the sounds of Fantasy, and at this point, it was apparent that Carey was relying heavily on a backing Persons immediately facing the stage openly commented on this. Her voice was somewhat off and she, even at one point, utilised a throat lozenge to help improve her output.

As the set progressed, her vocal quality improved but her audience, for the most part, was detached from the performance, as she seemed unable to draw them into the performance despite a string of hits. Touch My Body, Emotion, Give My All, Vision of Love, Make it Happen, I’m that Chic You Like, Honey, Heartbreaker, Always Be My Baby and more all rang out inside the venue, and she was even able to hit some of the higher notes with her trademark whistle register.

However, Carey was unaware of the songs in her set which made it lack flow and disjointed. Her between song banter did not do much to bring her audience. There were arbitrary comments on the colour of her gown on screen, how a stage hand reminded her of a former bodyguard, and ramblings about a seamstress adjusting her dress. Carey would explain these by saying: “I’m just being myself.”

This disconnect sent some patrons roaming the venue and doing other activities on the festival grounds.

It was, therefore, left to sibling band Morgan Heritage to save the day.

Despite a truncated set, which only listed for 30 minutes, and was cut short due to heavy rainfall, The Morgan clan had the audience rocking to their brand of reggae.

With Peetah Morgan’s voice ringing out, the band dropped Don’t Haffi Dread, Man is Still a Man, Here Come the Kings, What We Need is Love and Send Us Your Love. Gramps would take the patrons home with the popular rendition of Psalms 23.

Earlier in the evening, it was Richie Stephens and Arturo Tappin who were responsible for entertaining the ‘jazz’ audience, and this they did.

Tappin, the Bajan sax man, put on a show for his audience, and had the audience rocking to a plethora of musical genres put to music from his saxophone. Funk, reggae, jazz, pop and dancehall all came together in a pleasing set from Tappin who is no stranger to this festival’s stage.

Richie Stephens, the big-voiced balladeer, also delivered a mixed bag which went over well with his audience. From his lover’s rock reggae to smooth ballads and his latest creation ska-tech, he had the stadium rocking. His inclusion of dancers and stage antics of his own was appreciated by his audience.

The show’s opener was the Silver Birds steel band, they too entertained the patrons who were early inside the venue.