This post is based on an email that was sent and in no way reflects the views and opinions of ''Met'' or Jamaicanmateyangroupie.com. To send in a story send your email to likeacopcar.78@gmail.com
November 24, 2015 12:05 pm

RUSSIAN JET SHOT DOWN BY TURKEY 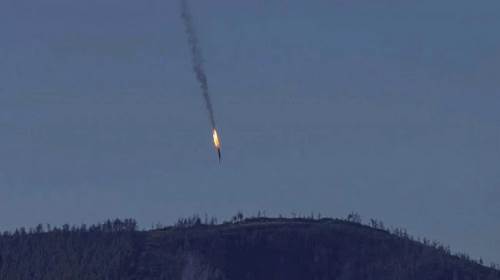 Turkish warplanes shot down a Russian jet Tuesday that Turkey said violated its airspace on the border with Syria, a major escalation in the Syrian conflict that could further strain relations between Russia and the West.

Russian officials confirmed that a Russian Su-24 attack aircraft was shot down, but insisted it had not violated the airspace of Turkey, a member of the NATO alliance.

Later, a Russian rescue helicopter was damaged by a rebel missile in Syria after picking up one of the two pilots who apparently ejected from the fire-engulfed plane, a Syrian activist group reported. A separate video purportedly posted by rebels appeared to show the body of the second pilot.

“A stab in the back,” complained Russian President Vladi­mir Putin in response to the plane downing.

Turkey’s military, however, said the Russian jet was warned multiple times before it targeted by two F-16 fighter jets in the border zone in western Syria in mountains not far from the Mediterranean coast.

The downing brings renewed attention to a scenario feared for months by the Pentagon and its partners: a potential conflict arising from overlapping air missions over Syria — with Russia backing the government of Syrian President Bashar al-Assad, and a U.S.-led coalition conducting airstrikes against the Islamic State.

NATO and Russia have been at odds over a series of flash points since the Cold War — including the NATO-led bombings in Bosnia in the 1990s and NATO support for Ukraine last year against pro-Moscow separatists — but the Syrian conflict has now put the two powers in possibly dangerous proximity.

In further signs of the spiraling tensions, NATO called an emergency meeting. But Turkey has not invoked Article Five, which requires the alliance to help defend any member that comes under armed attack, a NATO official said.

A top European Union official, Donald Tusk, posted a Twitter messaging urging all sides to remain “cool-headed and calm” at a “dangerous moment.” In the Turkish capital Ankara, the country’s leaders also met in crisis session.

The fallout could complicate a diplomatic push to bring greater international coordination to the fight against the Islamic State. The militant group — with strongholds in Syria and Iraq — has claimed responsibility for the Nov. 13 Paris attacks that claimed at least 130 lives, as well as the Oct. 31 downing of a Russian passenger plane over Egypt’s Sinai Peninsula that killed all 224 aboard.

Russia confirmed its jet had been downed but denied it had violated Turkish airspace during a bombing campaign in Syria.
As part of the high-level talks, French President François Hollande held meetings with President Obama in Washington to discuss strategies against the Islamic State and parallel efforts to seek a negotiated end to Syria’s nearly five-year civil war. Hollande is expected to meet later in the week with Putin and other world leaders.

Last month, the Western alliance decried a “troubling escalation” by Russian forces in Syria and raised concerns about attack missions within sight of NATO borders.

The Su-24 is one of dozens of fixed-wing aircraft flying sorties in Syria as part of Russia’s two-month-old bombing campaign, which Moscow says is aimed at crippling the Islamic State.

But Russian attacks have heavily targeted rebel groups — some backed by Turkey and its Western partners — seeking to bring down Assad, who is closely allied with Russia and Iran.

In the Russian resort city of Sochi, Putin said the plane “did not threaten the territory of Turkey” and claimed it was “pursuing operations” against the Islamic State in mountainous areas north of the Syrian port of Latakia.

He called the Turkish response a “stab in the back by the accomplices of terrorists” — an apparent reference to Turkish-supported rebel forces fighting Assad.

“Today’s tragic cases will have significant consequences for the relations between Russia and Turkey,” Putin told reporters after talks with Jordan’s King Abdullah II, whose nation is part of the U.S.-led coalition.

Putin claimed that Turkey “immediately turned to its partners from NATO to discuss this incident as though it was us who downed the Turkish jet and not the other way around.”

“Do they want to put NATO at ISIS’s service?” he said, using one of the acronyms for the Islamic State.

A U.S. defense official, speaking on condition of anonymity, said American forces were not involved in the plane incident, although commanders “closely monitor activity in the region.” In early November, the United States deployed additional fighter aircraft to Turkey’s Incirlik Air Base to help the country protect its airspace.

The Kremlin has not outlined any specific actions in response.

Some Russian lawmakers, however, have called for retaliation against Turkey by evacuating Russian tourists from popular vacation destinations. Russian Foreign Minister Sergey Lavrov cancelled a scheduled trip to Turkey.

The relationship between Turkey and Russia has soured over the Russian intervention. Turkey, which backs rebels seeking Assad’s ouster, has at least twice warned Russia about incursions into Turkish airspace.

Video footage of the incident showed a warplane on fire before crashing on a hill and two crew members apparently parachuting. But a video purportedly posted by Syrian rebels appeared to show the body of Russian pilot.

Friction between Ankara and Moscow has also intensified over alleged Russian airstrikes on Syrian villages dominated by Turkmen, an ethnic minority with cultural ties to Turkey.

As of Tuesday evening, officials in Moscow had not commented on or made public the status and whereabouts of the pilots.

But the rescue mission also appeared to be caught in conflict.

Rami Abdulrahman, head of the Britain-based Syrian Observatory for Human Rights, a monitoring group, said a Russian rescue helicopter was damaged by a rebel-fired missile after successfully retrieving at least one of the downed pilots. The missile struck the helicopter shortly after landing in a government-controlled area of Latakia province, he said, adding that none of the passengers were wounded.

Rebel forces released video footage showing an anti-government fighter using a surface-to-surface missile to destroy what appears to be a Russian helicopter. The authenticity of the video could not be confirmed.

Some rebels have been using U.S.-made BGM-71 TOW missiles as part of a covert program coordinated between the United States and its allies.

Last month, Turkey’s military downed an unmanned aerial vehicle near the border with Syria that military analysts said appeared to be of Russian manufacture. Officials in Moscow denied connection to that downed aircraft and sent a delegation to Turkey to smooth over concerns.

Russia issued a formal apology to Turkey in early October when a jet violated Turkish airspace and Turkish F-16s were scrambled to intercept the plane. The Russians called the mistake “a navigational error.”

Russia has carried out more than 4,000 airstrikes since it began its intervention in the Syrian civil war Sept. 30, using a force of modern and modified Soviet-era aircraft. Russia has at least 32 fixed-wing aircraft and 16 helicopters at the Khmeimim Air Base near Latakia, an Assad stronghold on the Mediterranean Sea just 30 miles from the Turkish border.

Roth reported from Moscow, and Deane reported from London. Liz Sly in Beirut and Brian Murphy and Thomas Gibbons-Neff in Washington contributed to this report.

Hugh Naylor is a Beirut-based correspondent for The Post. He has reported from over a dozen countries in the Middle East for such publications as The National, an Abu Dhabi-based newspaper, and The New York Times.