This post is based on an email that was sent and in no way reflects the views and opinions of ''Met'' or Jamaicanmateyangroupie.com. To send in a story send your email to likeacopcar.78@gmail.com
April 26, 2014 8:30 am 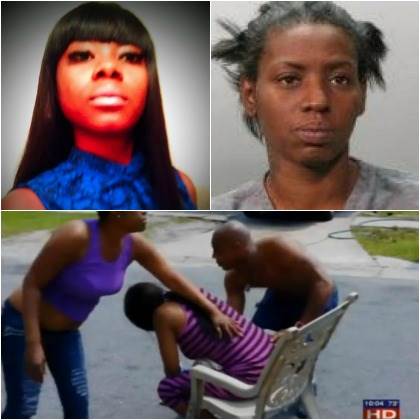 Two Jacksonville, Fl. women, reportedly once friends, took drama that brewed online, offline, and in the end, a mother has lost her child, and the other will most likely lose her freedom. According to WJXT-TV, pregnant 23-year-old Markeisha Brooks went to the home of Virginia Wyche on Wednesday to speak to her about statements that were made on Facebook that she wasn’t happy with, as the women actually argued on the social media site the night before. It’s unclear whether or not Brooks was invited by her former friend to come by to settle things, or if she went solely in anger to confront Wyche. It’s also unclear what happened when she got there, but things escalated and got physical between the women. At some point in this melee, Wyche was able to get her hands on a gun, and she shot the pregnant woman in her abdomen.
Video was actually taken of Brooks as she waited for the ambulance, and she was seen bent over, bleeding from her stomach, with individuals in the neighborhood coming to her aid, rubbing her back. The woman was taken to the hospital and is critical condition, but she lost her child. She was six months pregnant. As for Wyche, the 35-year-old woman was confronted by the victim at her mother’s home when she ended up shooting her. Wyche has been taken into custody and charged with murder. According to the New York Daily News, she is being held on $1 million bond. Her mother, Lillian Jordan, told WJXT that she couldn’t believe the news of her daughter’s arrest, saying that she must have been attacked or provoked because her kids weren’t raised to be have so recklessly.
“My son called me and I was very disturbed about this because this is not the way I was raised, and they was not raised like that. Somebody had to provoke my child to anger, to do what she one. I don’t know if she was trying to defend herself, was they trying to jump on my child, I can’t say.”
Just an unfortunate situation for everyone involved, and all over some petty drama on social media.