This post is based on an email that was sent and in no way reflects the views and opinions of ''Met'' or Jamaicanmateyangroupie.com. To send in a story send your email to likeacopcar.78@gmail.com
July 26, 2016 1:46 pm

The future looks a little bleaker.

The iconic television psychic Miss Cleo died on Tuesday after a battle with cancer.

Miss Cleo, who was born Youree Harris, died in hospice center in Palm Beach County, Fla., after being released from the hospital last week, TMZ first reported.The TV personality, famous for her thick Jamaican accent, urged viewers to call her hotline and get an insight into the future with the catchphrase, “Call Me Now!” 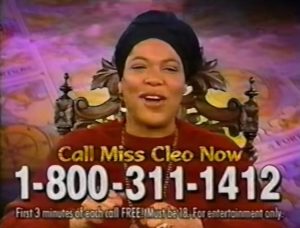 Despite the accent, she was actually born in Los Angeles and her Psychic Readers Network infomercial personality was all for show.

Her memorable Miss Cleo persona ran in television ads from 1997 to 2003.

Harris went on to other various jobs once the network closed down, including voicing a character in the video game, “Grand Theft Auto: Vice City.”

‘Internationally acclaimed psychics’ barred from using U.S. mail
In 2003, the Daily News reported Harris signed on to work as a spokeswoman for Fuse Network.

She later appeared as her Miss Cleo character in advertisements for a used car dealership in Florida.