This post is based on an email that was sent and in no way reflects the views and opinions of ''Met'' or Jamaicanmateyangroupie.com. To send in a story send your email to likeacopcar.78@gmail.com
June 7, 2013 7:10 am

MICHAEL MUST BE TURNING IN HIS GRAVE

Paris Jackson, the only daughter of the pop star, allegedly tried to slit her wrists and was taken to a Los Angeles hospital early Wednesday morning 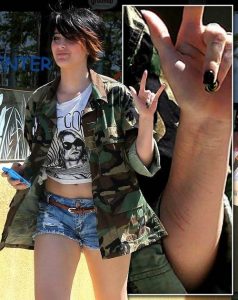 Paris Jackson has visible marks on her arm and wrist as she salutes photographers. The daughter of Michael Jackson reportedly attempted suicide at the Jackson family home.

The pressure of testifying in the high-stakes legal showdown over Michael Jackson’s death drove Paris Jackson to attempt suicide by slitting her wrist, sources close to the family told the Daily News.

The King of Pop’s only daughter was due to take the stand by the end of the month in the billion-dollar wrongful death lawsuit pitting the Jackson family against AEG, the promoter of his doomed run of concerts.

But rehearsals for the testimony have worn on the 15-year-old who watched her superstar father become a shell of himself before he died, a source said.

Paris Jackson was taken to a nearby hospital early Wednesday morning, after reportedly harming herself.

“Every time she speaks about Michael, she tears up,” said the source, referring to the teen’s interactions with family lawyers.

“She’s just a wreck. She was getting more and more emotional about having to take the stand as the day gets closer,” the source added. “This is a plea for help. She is broken.”

That source said that Paris cut one of her wrists multiple times early Wednesday at her Los Angeles area home following a series of ominous tweets. A second source confirmed she had cut her wrist.

Paris Jackson tweeted that an argument had escalated – though she did not say with whom.

A person close to the Jackson team of lawyers said she was mentally prepared for the trial.

“She wanted to testify. She willingly gave her deposition under subpoena by AEG and was graceful and articulate,” the legal source said. “She thinks these people (AEG) killed her father!”

Jackson, 15, photographed with her mother Debbie Rowe, who says the teen has ‘a lot going on.’

Now it’s unlikely that Paris will be called to the stand by her family’s lawyers — though AEG also has her on a list of witnesses.

“The plaintiff’s side wouldn’t even consider putting her in harm’s way,” the legal source said.

But Paris may have knowledge key to determining whether AEG was negligent in hiring Michael Jackson — and his drug-pushing doctor, Conrad Murray.

Debbie Rowe received a visit from police investigators to speak about daughter Paris Jackson on Wednesday.

“She saw everything that went on between his managers, the concert promoters, Murray and her dad,” the family source said.

“There are things Michael told her about these people. This was all mounting on her.

Paris Jackson and her brothers are currently in the care of their grandmother, Katherine Jackson.

Court documents show that the promoters of the tour were concerned with Jackson’s mental state during preparation for a hotly anticipated run of concerts in London in 2009.

The trial began in April and has already been a grueling affair that has detailed the King of Pop’s chemical dependency.

As the trial grinds on, choreographer Wade Robson, who worked with the pop sensation as a child, has come forward and leveled new accusations of child molestation against Michael Jackson.

Lawyers for the Jackson family did not dispute the notion that the loss of Paris Jackson’s father may have also played a role in the attempted suicide. 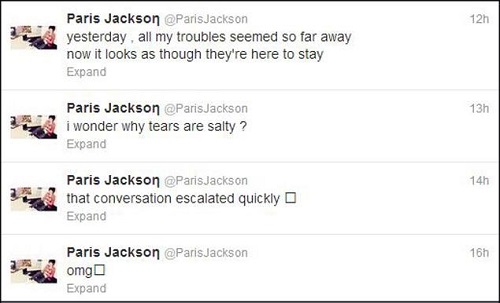 Jackson doesn’t mention who or what she’s referring to in her series of tweets.

“Being a sensitive 15-year-old is difficult no matter who you are. It is especially difficult when you lose the person closest to you,” said family attorney Perry Sanders. “Paris is physically fine and is getting appropriate medical attention.”

A lawyer for the matriarch of the Jackson family and Paris’ grandmother, Katherine Jackson, echoed that sentiment.

“(Paris) has suffered with the loss of her father,” said attorney Michael Koskoff. “But we don’t know what she was exposed to that precipitated this.”

Katherine Jackson has been caring for Paris since Michael Jackson’s death on June 25, 2009.

The latest shock wave to rock the Jackson family began at 1:27 a.m. when firefighters were called to the Calabasas mansion where the teen lives with Katherine Jackson for “a possible overdose.”

“I don’t know if there were any self-inflicted injuries,” Inspector Scott Miller of the Los Angeles County Fire Department told the Daily News.
Speculation spread like a California wildfire Wednesday afternoon regarding how Paris hurt herself and what drove her to do it.

TMZ initially reported Jackson had cut her wrists multiple times before being wheeled out of her home on a stretcher and taken to a nearby hospital. The website also reported that Paris used a meat cleaver to slice her wrist, and that she left a suicide note. She called a suicide hotline, which resulted in the operator calling 911, TMZ reported.
AP POOL/EPA

“She wanted to be saved,” a TMZ source said. “It makes no sense if you really want to die to call a hotline, where the person on the other end will get an ambulance over to your house.”

Some of the girl’s posts on social media raise concerns about her mental state.

A picture that Paris posted to her Instagram account appear to show scarring on her wrist — raising the possibility this isn’t the first time she’s cut herself.
Paris Jackson tearfully spoke at the memorial service for her late father in 2009.

“You say I need therapy, well, my darling, so do you. don’t need for you to tell me what is wrong in all I say or do,” Paris tweeted, quoting a song by the singer Zee Avi.

Michael Jackson’s only daughter was taken out of her Calabas home on a stretcher, TMZ reports.

“I wonder why tears are salty?“ she wrote later.

Around the time of the incident, she posted lyrics to the Beatles song “Yesterday.”

“Yesterday, all my troubles seemed so far away now it looks as though they’re here to stay,” she wrote.

“Entertainment Tonight” reported that Jackson tried to kill herself after being forbidden from attending a Marilyn Manson concert Thursday night in Los Angeles. Two sources close to the family told The News that was false.

Another source close to the family sought to portray the suicide bid as a cry for help. The source said Jackson had recently become closer with her biological mother, Debbie Rowe, who turned over full custody of Paris and her other child with Michael, Prince, in 1999 following their divorce

“This is more just a kid acting out,” the source said of Paris.

The same source claimed the suicide bid was probably spurred by a teen drama over unrequited love.

“It sounds more like a boy thing,” the source said.

Rowe told “Entertainment Tonight” that Paris has had “a lot going on.”

Jacko’s daughter had only recently emerged in the public eye, giving her first interviews and insisting her dad was a loving parent who wanted the most for his kids.

Paris recently photographed cheerleading for her high school, has said she wants to be a heart surgeon and is not interested in the music business.

Only last week, a video of her appeared on YouTube giving a makeup tutorial. She said she is “pink in the face” and has “acne” without her foundation. “I hope you guys liked it tho and didn’t think I’m too crazy . . . I get weird when I’m not around people lol,” she joked