This post is based on an email that was sent and in no way reflects the views and opinions of ''Met'' or Jamaicanmateyangroupie.com. To send in a story send your email to likeacopcar.78@gmail.com
August 2, 2016 9:55 am

A love-struck Dutchman who waited for ten days at an airport in China for a girl who never showed up has been taken to hospital with exhaustion.

Alexander Pieter Cirk, 41, flew from his home in the Netherlands to Changsha in central China to meet his 26-year-old girlfriend Zhang for the first time.

Despite being stood up, Mr Cirk waited in the airport for 10 days for his lover to arrive.

He was eventually removed by Chinese emergency services and taken to hospital where he was treated for exhaustion, CCTV news reported. 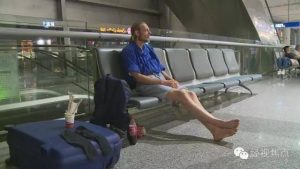 After news of the hopeless romantic’s ordeal went viral, CCTV news contacted Zhang who told them she thought her beau “was joking” when he said he was going to visit her in China.

She admitted she had been offline when he arrived as was undergoing plastic surgery in another city.

She said: “We had advanced our romantic relationship but later he seemed a little callous toward me.”

Mr Cirk booked a return flight to the Netherlands and was due to travel back home yesterday after being released from hospital.