This post is based on an email that was sent and in no way reflects the views and opinions of ''Met'' or Jamaicanmateyangroupie.com. To send in a story send your email to likeacopcar.78@gmail.com
January 23, 2015 11:17 am 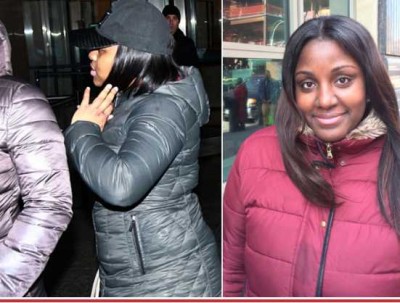 The New York Post reports that a Brooklyn courthouse turned into the set of “The Jerry Springer Show” Thursday when the girlfriend of a crook got into a knockdown brawl with his baby mama.
Whisper Binks-Carter, 22, was at Brooklyn Supreme Court when she got a call on her cellphone from Patrick Day, 25, who was waiting to be brought from Rikers Island and sentenced for shooting and paralyzing a man in a robbery.
Tiamnae Bookman, 25, the mother of Day’s child, walked up to Binks-Carter and demanded, “Is that Patrick?” law-enforcement sources said.
Bookman snatched the phone and said, “This conversation is over.”
The two women began punching each other and were separated by two court officers, one of whom injured his knee in the fray.
Both got summonses for disorderly conduct.
Outside court, Carter showed no remorse.
“It’s rude to grab somebody’s phone,” she said. “When she grabbed my phone, I thought, ‘I’m going to f- -k her up.’ ”
Bookman declined to comment as she left.
Court operations chief Michael Magliano praised the two court officers for their professionalism.