This post is based on an email that was sent and in no way reflects the views and opinions of ''Met'' or Jamaicanmateyangroupie.com. To send in a story send your email to likeacopcar.78@gmail.com
January 16, 2015 7:22 am

FLORIDA POLICE USE PICTURES OF BLACK MEN FOR TARGET PRACTICE 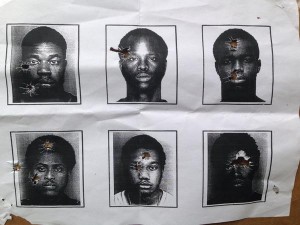 Florida police have some tough questions to answer after a group of National Guardsmen made a galling discovery at a local shooting range.
According to a report by NBC, cops in North Miami Beach were caught using photographs of real people for target practice. All of them were “mug shots of African American men,” at least one of which belonged to a suspect that had previously been arrested by the department.
The background: National Guard troops discovered the practice when they entered the City of Medley-owned Medley Firearms Training Center to find bullet-riddled targets of black men apparently left by a group of North Miami Beach Police snipers.
Sgt. Valerie Deant told NBC that she was left “speechless” after finding one of the targets was her brother Woody Deant, who had been arrested and sentenced to four years of jail in 2000 for involvement with a illegal drag race that killed two people. Woody Deant was outraged.
“Now I’m being used as a target?” he told reporters. “I’m not even living that life according to how they portrayed me as. I’m a father. I’m a husband. I’m a career man. I work 9-to-5.”
North Miami Beach Police Chief J. Scott Dennis said using real faces was necessary for facial recognition drills and added that “there is no discipline forthcoming” for any officers involved. Chief Dennis added that he was “very, very concerned” about the inclusion of an actual resident of North Miami Beach, but said that the agency used similar sheets of all-Hispanic or all-white targets.
Federal, state and five local law enforcement agencies all use commercially-produced targets (typically computer-generated) rather than printed mugshots.

“The use of those targets doesn’t seem correct,” retired FBI agent Alex Vasquez told NBC. “The police have different options for targets. I think the police have to be extra careful and sensitive to some issues that might be raised.”