This post is based on an email that was sent and in no way reflects the views and opinions of ''Met'' or Jamaicanmateyangroupie.com. To send in a story send your email to likeacopcar.78@gmail.com
October 15, 2016 8:18 am

The incident occurred at approximately 5:30 p.m., after a 21-year-old woman, who is a United States citizen, approached the checkpoint in a black 2006 Nissan 350Z.

A Border Patrol detection canine alerted to the vehicle during primary inspection. Agents referred the woman to the secondary inspection area for a closer examination.

After an intensive search, agents discovered 32 packages hidden inside of an aftermarket speaker box behind the driver’s seat of the vehicle. 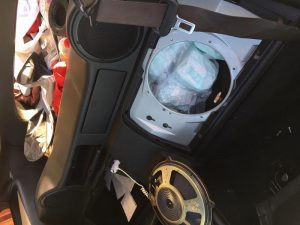 “The narcotics that were seized today are the kind that have been devastating the most vulnerable members of our communities and our nation. Our agents’ work on this arrest and seizure is another example of their commitment to identifying and mitigating threats to the safety, security, and well-being of our community,” said David S. Kim, Assistant Chief Patrol Agent.

The woman, the vehicle, and narcotics were turned over to the Drug Enforcement Administration for further investigation.

This is the first narcotics seizure of fiscal year 2017 for the El Centro Sector.