This post is based on an email that was sent and in no way reflects the views and opinions of ''Met'' or Jamaicanmateyangroupie.com. To send in a story send your email to likeacopcar.78@gmail.com
January 9, 2015 7:14 am

BROTHERS WHO KILLED MAGAZINE EMPLOYEES IN PARIS LINKED TO ALQUEDA 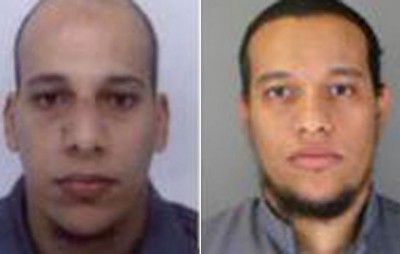 It has been confirmed that one of the two brothers suspected of gunning down 12 people in an attack on a Paris-based satirical magazine traveled to Yemen in 2011 and had direct contact with an Al Qaeda training camp, according to U.S. government sources.

Investigators say they have made it a priority to determine whether he had contact with Al Qaeda in Yemen’s leadership, including a bomb maker and a former Guantanamo Bay detainee.

Both Said Kouachi, 34, who is known to have gone to Yemen, and his brother, Cherif Kouachi, who served time in France on a terrorism conviction, were on a U.S. no-fly list, sources confirmed. The new information shows both suspects, who were still being hunted Thursday night, had ties to Al Qaeda affiliates, one in Yemen and the other in Iraq.

“AQAP (Al Qaeda’s Arabian Peninsula affiliate) has been the real force within Al Qaeda that’s always been focused on external operations against the West and the United States – the most committed to doing this,” Rep. Mike McCaul of Texas, chairman of the House Homeland Security Committee, told Fox News. McCaul has been getting regular briefings about the Paris attack.

“This would be one of the more real successes that they’ve have had if it turns out to be true.”

While there has been no credible claim of responsibility for the attack, Fox News was told that the evidence increasingly points to the likely involvement of a foreign terrorist organization — either inspiring or directing the attack. Less than an hour after the attack, a series of tweets accompanied by images of three Al Qaeda members – Ayman al Zawahiri, the leader of Al Qaeda in Pakistan, and two American members of AQAP who were both killed in U.S. drone strikes, Samir Khan and Anwar al-Awlaki – went out, raising more suspicions the attack was a possible Al Qaeda plot.

Even as French authorities focused an intense manhunt on a vast forest north of Paris, other details about the Kouachis were trickling out, painting a picture of alienated brothers, sons of Algerian immigrants who later died. Experts who viewed cellphone video of their escape from Wednesday’s rampage said it was apparent they’d had training, citing such examples as the way the laid down cover fire for each other and their commando-style flight in a getaway car.

“He drinks, smokes, he doesn’t have a beard. What interests him is football. He is an ideal target for Islamic preachers.”

— They were born in Paris’ 10th Arrondissement (district) to parents of Algerian origin, but reportedly grew up in a secular home.

— They are believed to have lost their parents, and grew up as orphans, with Cherif bouncing around foster homes in the city of Rennes, in the Brittany region of western France.

— Cherif trained to be a fitness instructor, and eventually both brothers returned to Paris as adults.