This post is based on an email that was sent and in no way reflects the views and opinions of ''Met'' or Jamaicanmateyangroupie.com. To send in a story send your email to likeacopcar.78@gmail.com
August 21, 2013 12:20 pm

BRADLEY MANNING FROM WIKILEAKS GETS 35 YRS..I WONDER HOW MANY YEARS SNOWDEN WILL GET? 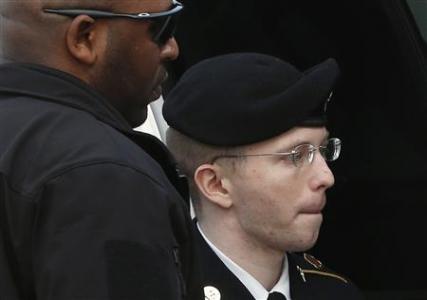 (Reuters) – Bradley Manning, the U.S. soldier convicted of the biggest breach of classified data in the nation’s history by providing files to WikiLeaks, was sentenced to 35 years in prison on Wednesday.

Judge Colonel Denise Lind, who last month found Manning guilty of 20 charges including espionage and theft, could have sentenced him to as many as 90 years in prison. Prosecutors had asked for 60 years.

Manning, 25, will be dishonorably discharged from the U.S. military and forfeit some pay, Lind said. His rank will be reduced to private from private first class.

Manning would be eligible for parole after serving one-third of his sentence, which will be reduced by the time he has already served in prison plus 112 days.

Wearing his dress uniform, the slightly built Manning stood at attention as the sentence was read, seeming to show no emotion. As he was escorted out of the courtroom, supporters shouted “Bradley, we are with you.”

Elizabeth Goitein, co-director of the Liberty and National Security Program at the Brennan Center for Justice, called the sentence “unprecedented” in its magnitude.

“It’s more than 17 times the next longest sentence ever served” for providing secret material to the media, Goitein said. “It is in line with sentences for paid espionage for the enemy.”

In 2010, Manning turned over more than 700,000 classified files, battlefield videos and diplomatic cables to WikiLeaks, the pro transparency website, in a case that has commanded international attention.

Defense attorneys had not made a specific sentencing request but pleaded with Lind not to “rob him of his youth.”

Manning was working as a low-level intelligence analyst in Baghdad when he handed over the documents, catapulting WikiLeaks and its founder, Julian Assange, into the international spotlight.

The classified material that shocked many around the world included a 2007 gunsight video of a U.S. Apache helicopter firing at suspected insurgents in Baghdad. Among the dozen fatalities were two Reuters news staff. WikiLeaks dubbed the footage “Collateral Murder.”

The case highlighted the difficulty in keeping secrets in the Internet age. It raised strong passions on the part of the U.S. government, which said Manning had put American lives at risk, and anti-secrecy advocates, who maintained Manning was justified in releasing the information.

During a pretrial hearing, Lind had determined that the eventual sentence would be reduced by 112 days because of harsh treatment after his arrest in 2010. He likely will be imprisoned at the U.S. Disciplinary Barracks at Fort Leavenworth, Kansas.

A U.S. rights group has said Manning should be a candidate for this year’s Nobel Peace Prize.

“Instead of fighting tooth and nail to lock him up for the equivalent of several life sentences, the U.S. government should turn its attention to investigating and delivering justice for the serious human rights abuses committed by its officials in the name of countering terror,” said Widney Brown, senior director of international law and policy at Amnesty International.

Manning’s trial at Fort Meade, Maryland, home of the ultra-secret National Security Agency, wound down as U.S. officials sought the return of Edward Snowden. The former NSA contractor, who disclosed details of secret U.S. programs that included monitoring the telephone and Internet traffic of Americans, has been given temporary asylum in Russia.

The Guardian said on Tuesday that British authorities had forced the newspaper to destroy materials leaked by Snowden.