This post is based on an email that was sent and in no way reflects the views and opinions of ''Met'' or Jamaicanmateyangroupie.com. To send in a story send your email to likeacopcar.78@gmail.com
August 20, 2014 7:00 am 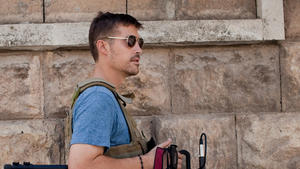 The mother of American journalist James Foley, who was purportedly beheaded by Islamic militants, said on Tuesday her son gave his life to expose the suffering of the Syrian people and she asked his kidnappers to release their other captives.

“He was an extraordinary son, brother, journalist and person,” Diane Foley said in a post on a Facebook page set up by the Foley family.

The Islamic State militant group claimed Tuesday to have beheaded the photojournalist in retaliation for U.S. airstrikes in Iraq. Foley was a graduate of Northwestern University’s Medill School of Journalism.

“Journalists face threats in many forms as they try to report difficult stories that need to be told, but the attack on Jim was barbaric,” Northwestern said in a statement. “It was, in a larger sense, an attack on freedoms necessary in a civilized society and across strained cultures. Jim endures for us as a beacon reminding us of the risks implicit in shedding light where inhumanity can take hold.”

A chilling video posted on YouTube, later removed, purported to show the execution of James Foley after he recited a statement in which he called the U.S. government “my real killers.”

“I call on my friends, family and loved ones to rise up against my real killers — the U.S. government. For what will happen to me is only a result of their complacent criminality,” the kneeling man says.
lRelated Islamic State message to America: ‘we will drown all of you in blood’

Nation & World
Islamic State message to America: ‘we will drown all of you in blood’

A second prisoner, said to be Steven Sotloff, like Foley an American journalist who disappeared while covering Syria’s civil war, then appears in the video.

The black-clad, masked executioner, speaking in English, identifies Sotloff and says that “the life of this American citizen, Obama, depends on your next decision.”

U.S. intelligence officials said they were evaluating the video and could not immediately authenticate its contents.

“The intelligence community is working as quickly as possible to determine its authenticity,” said the statement by National Security Council spokeswoman Caitlin Hayden. “If genuine, we are appalled by the brutal murder of an innocent American journalist and we express our deepest condolences to his family and friends. We will provide more information when it is available.”

Both prisoners in the video are wearing orange shirts and pants, similar to orange jumpsuits worn by detainees at the U.S. military prison at Guantanamo Bay, Cuba. A similar outfit, believed to be a jihadist symbol of the prison, was worn by Nicholas Berg, an American businessman kidnapped in Iraq in 2004 whose execution by an Islamic State precursor organization was videotaped and posted online.

Foley, 40, who received a master’s degree from Medill in 2008, was working in Syria for the Boston-based news website GlobalPost when he disappeared on Thanksgiving Day in 2012.

“He was a passionate and dedicated teacher in our boot camp,” Smith said. The program is an alternative to a state prison sentence.

“He was fluent in Spanish and was able to connect with our Spanish-speaking boot camp participants,” Smith said. “He believed passionately in education and its ability to reduce recidivism.”

Northwestern released a statement saying the “Medill family is shocked and deeply saddened by the news of the murder of James Foley.”

“Journalists face threats in many forms as they try to report difficult stories that need to be told, but the attack on Jim was barbaric,” the university said in the statement. “It was, in a larger sense, an attack on freedoms necessary in a civilized society and across strained cultures. Jim endures for us as a beacon reminding us of the risks implicit in shedding light where inhumanity can take hold.”
Archives: Former Northwestern student held in Libya
Archives: Former Northwestern student held in Libya Open link

Foley, a native of New Hampshire, reported about conflicts in Iraq, Afghanistan, and Libya, where he was held captive for 44 days.

After his release in Libya in 2011, Foley returned to Medill for an event in which he was interviewed by Tim McNulty, a Medill lecturer and former Chicago Tribune associate managing editor. Foley emphasized the importance of informing Americans about conflicts overseas.

“’Conflict journalism’ is very important. … We need to know that most of the world is a dictatorship,” Foley said. “Most of the world, you cannot speak your mind. Most of the world, there’s no due process. Being away from the U.S. for a long time in these places, it really got knocked into me this time, man. We live in a pretty good place.”

Sotloff, a freelancer who worked for several news organizations, disappeared in Syria in August 2013.

Islamic State, an offshoot of al-Qaida, is the most powerful among a number of extremist organizations that have emerged during the Syrian civil war. The militants now control much of eastern Syria and parts of northern Iraq.

On Aug. 7, President Barack Obama authorized U.S. airstrikes to rescue stranded minorities and protect U.S. personnel and facilities in Irbil and Baghdad. On Monday, after a total of 68 strikes from fighter jets, bombers and drones, Obama announced that Iraqi and Kurdish forces had retaken a strategic dam north of Mosul from the militants and that they had been pushed back from Irbil.

Within hours of that announcement, the Islamic State posted an online message warning it would attack Americans “in any place” in response to the airstrikes.

“We will drown all of you in blood,” it said.