This post is based on an email that was sent and in no way reflects the views and opinions of ''Met'' or Jamaicanmateyangroupie.com. To send in a story send your email to likeacopcar.78@gmail.com
July 1, 2016 2:44 pm

Al Qaeda leader Ayman al-Zawahri has warned the United States of the “gravest consequences” if Boston marathon bomber Dzhokhar Tsarnaev or any other Muslim prisoner is executed.

Tsarnaev, named in a new online video message from Zawahri, was sentenced last year to death by lethal injection for the 2013 bomb attack, which killed three people and injured more than 260.

“If the U.S. administration kills our brother the hero Dzhokhar Tsarnaev or any Muslim, it … will bring America’s nationals the gravest consequences,” Zawahri said. 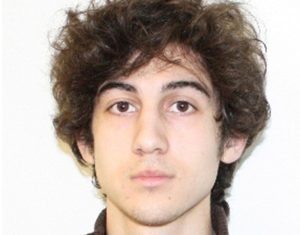 Zawahri, who became al Qaeda’s leader after U.S. forces killed Osama bin Laden in 2011, urged Muslims to take captive as many Westerners as possible, especially those whose countries had joined the “Crusaders’ Campaign led by the United States”.

Bystanders help an injured woman at the scene of the first explosion on Boylston Street near the finish line of the 117th Boston Marathon.
47 PHOTOS
VIEW GALLERY
Look back at the Boston Marathon bombings
Western powers “are criminals and they only understand the language of force”, he added.

The nearly hour-long video, which included images of Tsarnaev, gave no indication of the location of Zawahri, believed to be based close to the Afghan-Pakistan border.

The 2013 attack killed three people and injured 264. (DAN LAMPARIELLO/REUTERS)
Tsarnaev carried out the Boston bombings along with his older brother Tamerlan, who was killed in a confrontation with police soon after. No organization claimed responsibility.

Boston Marathon bomber’s lawyers ask judge for new trial
Tsarnaev is being held at the “Supermax” high-security prison in Florence, Colorado, while his attorneys appeal his death sentence.

Legal wrangling over Tsarnaev’s fate could play out for years or even decades. Just three of the 74 people sentenced to death in the United States for federal crimes since 1998 have been executed.