This post is based on an email that was sent and in no way reflects the views and opinions of ''Met'' or Jamaicanmateyangroupie.com. To send in a story send your email to likeacopcar.78@gmail.com
June 3, 2016 7:37 am

17 YO GETS LIFE SENTENCE FOR DOUBLE MURDER

An Austell teen with an extensive record could spend the rest of his life in prison after admitting he shot and killed two Powder Springs men when he was just 14 years old, Cobb County District Attorney Vic Reynolds said.

According to a release from Reynolds’ office, Reid shot the men while in the backseat of a car at the park on March 16, 2014. A woman living near the park heard the gunshots and called police, officials said. When police got there, they found Banks and Hargrave dead. 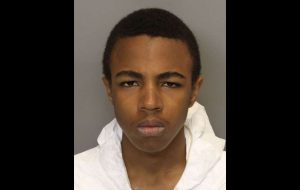 An officer spotted Reid leaving the woodline where he tossed a 9mm gun and a bag of marijuana, according to the release. Reid was cornered by police when he ran back to the park.

Reid, who was associated with the Ham Squad, a Powder Springs street gang, had been seen with Banks and Hargrave in the days before the shooting. Authorities believe the shooting was the result of a drug deal gone bad.

According to ballistics reports, Banks’ DNA was found on Reid’s clothes and Reid’s fingerprints were found on the gun.

Jimmy Berry, Reid’s attorney, said Reid was a young man who got mixed in with the wrong crowd, but was remorseful for his crime. Reid said little during the hearing, which was attended by relatives of the victims.

Reid’s sentences will run concurrently. He must serve 30 years before he is eligible for parole and will get credit for time served. He has been in custody since 2014.

Harris urged Reid to make better choices, such as completing his GED, while in prison.

“There are two people who are dead, sir, and there’s no such thing as closure,” Judge Harris said. “You may have been hanging with the wrong crowd, but at some point you became the wrong crowd.”