This post is based on an email that was sent and in no way reflects the views and opinions of ''Met'' or Jamaicanmateyangroupie.com. To send in a story send your email to likeacopcar.78@gmail.com
January 18, 2015 9:42 am 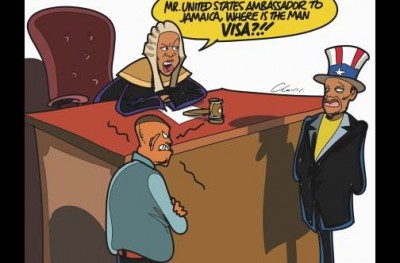 THE Corporate Area Resident Magistrate’s Court was the scene of a love triangle last week when two Rastafarian men appeared following a dispute, which reportedly stemmed from a woman with whom they are both involved.

The men, along with the woman, were forced to attend court on Tuesday following a row in which the accused, Allan Buchanan, reportedly attacked the other man and hit him on his shoulder and hip with a stone causing pain and swelling.

The incident occurred on September 11 last year around 8: 40 pm while the complainant was reportedly on his way to shop at the East Kirkland Heights community in St Andrew where he lives.

But the woman told the court that the incident was over some banana and plantain trees that the complainant had given her.

“This one gave me some plantain and banana trees but because we are not together and what him want him not getting, him come to me yard and chop up all de trees,” she stated.

Further, she said that on the day of the incident when the complainant went to her home they got involved in a confrontation. Her new lover intervened and came to her defence, she said.

But the complainant told a different story.

“A go a going to shop when this breda come and fling stone afta me and hit me on me shoulder and chest. Every day I am in pain, I can’t even work,” he said.

“When I met this woman she was on the brink to drop off a life,” the complainant continued. “She have two kids and a me give them three meals a day, drop them off a school and carry lunch money go give them and this girl use this man and influence him to hit me.”

Senior Resident Magistrate Judith Pusey on hearing both sides of the story then extended Buchanan’s bail and scheduled the matter for mention on March 3.

According to the complainant’s report he was walking past premises occupied by the 34-year-old labourer, when he ran out of the yard and said to him: “P@#%$^ whey yuh a look pon me fa? A kill mi fi kill yuh.”.

It was reported that Buchanan then started to stone the complainant who was hit on his hip and shoulder.

The complainant in his statement said that he was along with the woman for six years but that he ended the relationship in 2013 after he found out that she was having an affair with the accused.

After the relationship ended, he said that the woman moved the accused into her home but would still visit him at his house to exchange money for sex and other things.

On August 31 last year he said that the woman visited him at his house asking if he could give her some money to send her daughters to school. The complainant said that he gave her $500 and walked with her to the shop where he bought her some grocery items for her to cook.

In the first week of September, the complainant said that the woman called him on his phone asking for money to send her children to school and he told her “with attitude” that she lived with a man so she should stop stressing him.

The complainant said he told the woman to stop calling his phone and that he was coming for the plants that he had planted at the back of her yard when they were together.

Shortly after that, the complainant said that the woman started to call him, saying he was not to come to her home because her man was going to chop him up with his machete.

But the complainant said that in the same week, he received another call from the woman saying that she would visit his house. He said he told her not to, as he was not there.

The complainant in his statement alleged that the woman went to his house without his permission and took away his money. Following that, he said he went to her home and chopped down all the plants that he had planted.

The woman reportedly called and told him that the money was almost finished and that he could sell the plants.

Shortly after that, the complainant said he was on his way to a shop when Buchanan attacked and injured him with some stones.

and makes him steal

A gardener who stole a little over $400,000 worth of shoes from his employer’s house, claimed that he was under an evil spell when he stole the shoes.

Orville Reece, 45, of Bull Bay, St Andrew, was arrested and charged with simple larceny after he removed $410,000 worth of shoes from his employer’s garage at her Paddington Terrace home in St Andrew on Boxing Day.

On Friday when Reece appeared in court before RM Pusey he admitted to the theft but blamed his action on obeah.

“Is a evil spirit somebody set on me,” Reece told the court.

The magistrate then asked: “How many times evil spell cause you to get into trouble already?

Reece then told her that he has got into trouble twice for larceny.

“Mister gentleman, I’m not into the evil spell thing. If you know that evil spell following you around and making you steal, you have to go to church and make them wash you in holy water,” the magistrate told him.

The magistrate then asked Reece how long he had served on his last sentence and was told 18 months.

“Well we have to pep it up,” RM Pusey said, before Reece was slapped with a two-year prison sentence.

Before Reece was led from the prisoner’s dock, the magistrate told him: “When you go in there join up with the chaplain and let him exorcise the demon from you.”

Reece was taken into custody after he admitted to taking the shoes and led the police to a location where some of shoes were recovered.

The complainant is a businesswoman who operates a store in Kingston, which sells male clothing and shoes. The complainant also does distribution and was storing the goods in her garage at home at the time of the incident.

A self-confessed homosexual man who claimed that he was set up by his friend during a shoplifting expedition at MegaMart Wholesale Club on Waterloo Road in St Andrew was sentenced to six months in prison last week.

Everton Malcolm, 20, of Greenwich Town, in Kingston, was sentenced by RM Pusey on a charge of shoplifting after he was held outside the store with the items in a handbag on January 4.

According to the statement of the security guard who held Malcolm, on the day of the incident he was in the camera room when he saw two men pushing a trolley.

One of the men had a handbag over his shoulder while another handbag was hanging on the side of the trolley, the guard said.

The guard said that one of the men, who was later identified as Malcolm, went behind a shelf and placed some items in the bag while the other went to the cashier to cash some items.

Malcolm then exited the store with the items but was held by the guard who summoned the police.

The young man when cautioned by the police reportedly said: “Me hungry and me naa wuk.”

But on Friday when the matter was mentioned, Malcolm, who had a small headband over his curly hair, said that he was innocent, claiming that his “girlfriend” had set him up.

He them complained to the court that “the police man thump me in a me eye and it did swell up and bare things.”

RM Pusey was not convinced and sentenced him to serve six months in prison.

But before he left, Malcolm lodged another complaint about the police.

“Maam de police nuh stop trouble me and me nah get nuh food and me nah get fi bathe,” he said. He was promised by the magistrate that she would address the matter.

A higgler who stole a woman’s phone from her handbag but claimed he found the item on the road was slapped with a nine-month prison sentence.

Everald Jones, 46, of Greenwich Town, Kingston was arrested and charged with larceny from the person after he was held with the complainant’s phone on December 5.

The court heard that on the day in question the complainant was exiting a car at the intersection of Constant Spring Road and Courtney Walsh Drive when Jones stole her phone from her bag.

“Me nuh know wa come inna me,” Jones reportedly told the police when he was cautioned.

Jones then ran onto a nearby plaza where he was held by the guards and handed over to the police.

On Friday when Jones appeared in court he pleaded guilty but explained that he had found the phone.

“I found it. I saw the phone on the ground and I picked it up and when I walk across the road me heard a lady shouting out “thief” and I give the phone to a security guard and tell him to give the lady cause a must be her phone,” he said.

Jones said that the lady then came across the road and started behaving “ignorant” and accused him of stealing the phone.

“My friend, you have to change your ways,” RM Pusey then said to him. “You ever hear the song, Yield not to temptation for yielding is sin?”

The complainant for her part then told the court that Jones did not find the phone and that he had in fact picked it from her bag.

She said that when she was exiting the car she felt someone bounce into her and when she checked for the phone it was missing.

Jones then interjected and said in his defence: “When I bounce on her is picking I was picking up the phone.”

He was subsequently sentenced by the magistrate after he informed her that he had got in trouble for larceny before.